Trending
You are at:Home»Aviation»Ryanair teams up with Spanish rival to Willie Walsh’s low-cost airline LEVEL

Michael O’Leary’s Ryanair has stolen a march on Willie Walsh’s IAG, which kicks off its low-cost LEVEL transatlantic service from Barcelona to the Americas on June 1, by linking with LEVEL rival Air Europa.

Ryanair has announced a new flight partnership with the Spanish carrier, which will allow the Irish airline’s 130m customers to book Air Europa long haul flights on the Ryanair.com website. Customers can browse and book Air Europa flights on 20 long haul routes from Madrid to 16 countries in North, Central and South America, including Argentina, Brazil, Cuba, Mexico and the United States. 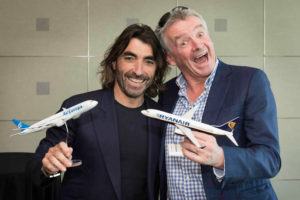 LEVEL, launched by IAG, which counts Aer Lingus, British Airways and Iberia among its members, is to offer low-cost services from Spain’s second city to Oakland, Los Angeles, Buenos Aires and Punta Cana this summer.

The new partnership is the latest initiative under Year 4 of Ryanair’s “Always Getting Better” customer experience programme, and follows the launch of Ryanair’s connecting flight service on its own flights via Rome Fiumicino last week.

The second phase of this Air Europa partnership will be launched later this year and will allow Ryanair customers to connect onto Air Europa long haul flights through Madrid. Ryanair is continuing its discussions with a number of other long haul airlines – including Aer Lingus and Norwegian – on potential feed and connecting flight partnerships.

Ryanair CEO Michael O’Leary, speaking in Madrid, said: “We are pleased to announce this exciting partnership with Air Europa, which allows our customers to browse and book flights on 20 long routes from Madrid to exciting cities in Argentina, Brazil, Cuba, Mexico and the USA on the Ryanair.com website. Ryanair operates over 50 short haul routes to/from Madrid and now our customers can book  flights on  Air Europa long haul routes to destinations including Buenos Aires, Havana and New York.

“This partnership is the latest AGB enhancement as we continue our journey to becoming the ‘Amazon of travel.’ We continue to speak to a number of other long haul airlines about potential connecting flight partnerships and we look forward to offering our 130m customers an even greater choice and range of long haul services in 2018.”

Globalia Group CEO Javier Hidalgo said: “This partnership with Ryanair gives us great satisfaction, and it puts us at the forefront of business and allows us to strengthen our competitiveness. With this agreement Air Europa doubles its connectivity with the European continent adding 53 European cities.

“This agreement consolidates Air Europa, the only regular airline with 100% Spanish capital, as the best price-quality option to fly between Europe and America. I am also happy to announce that in 2020 Air Europa will have the most modern and efficient fleet of the market operating between both continents.”