Ryanair has said there is strong demand for their new route to Berlin from their new Belfast base.

The route is the first direct European destination for Ryanair from Belfast and Belfast International Airport managing director Graham Keddie says Berlin shows what can be achieved with direct air access to important tourist markets. 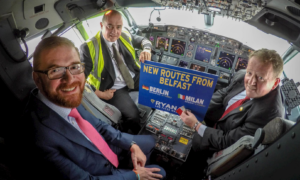 Keddie said: “Germany is one of the biggest outbound tourist markets in the world and for far too long, we weren’t able to attract visitors directly to Northern Ireland. At no cost to the taxpayer, Ryanair will deliver thousands of German tourists in its first full year of operation.The airline’s return to Northern Ireland is an enormous boost for the local economy. It says it will carry one million passengers on all eleven routes it will operate between now and autumn 2017 and that’s great news for our tourism industry.”

The Economy Minister, Simon Hamilton MLA, who also holds the tourism portfolio, welcomed the commencement of the Berlin service and said he looked forward to further growth.

Minister Hamilton said: “Air connectivity is an important driver for economic growth. Connecting with new and strategic destinations such as Berlin will be a huge boost for the business and tourism markets. With air passenger numbers at our airports continuing to grow this new Ryanair Berlin route is further evidence of a returning confidence to the Northern Ireland travel market.”

The Berlin flightpath is the first of 10 new Ryanair routes to operate from Belfast this winter, alongside routes to Alicante, Gdansk, Krakow, Lanzarote, Malaga, Milan, Tenerife, Warsaw and Wroclaw.

The airline is offering a sale across the routes, from £19.99, which are available for booking until midnight on September 1.