Trending
You are at:Home»Aviation»Dublin and Shannon get facial recognition technology for US preclearance 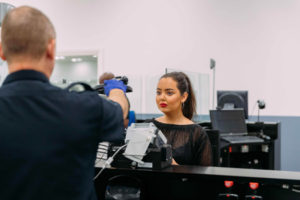 – Shannon was the first airport in Europe to have facial recognition installed for US preclearance. Photo: Eamon Ward

Shannon and Dublin airports have become the second and third airports after Aruba to get facial recognition technology for US preclearance passengers.

US CBP claim that the facial recognition verification process takes less than two seconds, with a 99pc matching rate.

They were intrduced in Dublin on June 6, having been rolled out in a dozen US airports, and extended to Abu Dhabi and Aruba A pilot programme at Shannon has been running since April.

US CBP claim that facial recognition technology has already helped prevent a man attempting to enter the US using a passport belonging to someone else. The 26-year-old was intercepted at Washington’s Dulles International Airport on a flight from Brazil attempting to use a French passport that was not his own. A CBP press release said: “the officer utilised CBP’s new facial comparison biometric technology which confirmed the man was not a match to the passport he presented, A search revealed the man’s authentic Republic of Congo identification card concealed in his shoe.”

JetBlue introduced a collaborative trial with the US Customs and Border Protection In June 2017 “to test a new paperless and deviceless self-boarding process as part of ongoing trials to implement a biometric exit process in the future”. The carrier became the first airline to integrate with CBP to use biometrics and facial recognition technology to verify customers at the gate during boarding.

Finnair invited 1,000 of its frequent flyers to participate in a face recognition test at Helsinki Airport to improve the airline’s understanding of the impact face recognition technology could have on the customer experience. Heikki Koski, vice president of Helsinki airport said “we want to make air travel flow even smoother and be involved in developing the customer experience. Facial recognition is part of the larger megatrend of biometric recognition, and it will enable hands-in-the-pockets travelling, where you no longer need any travel documents.”

Shanghai Hongqiao International Airport is China has launched an automated security clearance system using facial recognition. Eight security machines scan passengers’ ID cards and faces to check they match, reducing the clearance procedure time to around 12 seconds. The project took three years to complete and the facility is available only to Chinese ID cardholders.  Dai Xiaojian, vice president of Shanghai Airport, said in a statement that, although the quantity of passengers moving through the terminal per hour will remain at 10m, the quality of the security check will be vastly improved.These machines are part of a move to make the whole airport process unassisted, from check-in to bag drop, security clearance to boarding.

Facial recognition is the latest update for Shannon, the airport which in 2016 became the first airport in the world to operate a combined EU and US TSA checkpoint systems, halving the time spent in security screening at other preclearance airports. The facial recognition technology verifies passengers by matching them to the documents they are presenting. It can process up to 10 passengers a minute, roughly 10 times faster than the finger printing system used at Dublin Airport.

Shannon Operations Director Niall Maloney said:  “Being the first airport in Europe to have this ground-breaking technology installed reaffirms Shannon’s status in transatlantic aviation. We were the first to get preclearance and now we’re the first to pilot this technology. The big gain here is that this the latest enhancement to passenger services at Shannon. We’re coming to the end of our busiest summer season on transatlantic since the early part of the last decade and anything that speeds up queues and enhances security is a major plus.”

Shannon Airport Managing Director Andrew Murphy said: “We are delighted that US Customs and Border Protection has selected Shannon for this pilot.  We’ve had an excellent working relationship with them since Shannon, in 2009, became the first airport outside the Americas to have US preclearance. This means that we have the most efficient and reliable systems in place for passenger screening for the US.  That’s good for security but also very good for the passenger.”