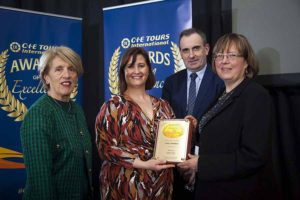 The Cliffs of Moher visitor centre is Ireland’s second most visited attraction in 2016 with 1,427,166 visitors. 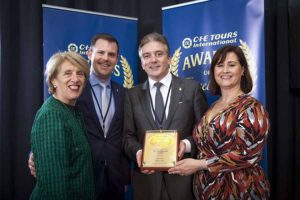 Thirteen category winners from around the country were chosen according to customer feedback, including hotels, entertainment venues and tourist destinations ranging from Best 5 Star Hotel Award to a national heritage award.

CIE Tours International, a member of the CIE Group, operates all-inclusive coach tours and fly-drive programmes to Ireland as well as coach tours of Britain and mainland Europe. It also provides combined tours of Ireland and the UK. It is the most successful tour operator involved in delivering tourism to Ireland from North America, carrying 45,000 customers in 2016.

The Chief Executive of CIE Tours International, Elizabeth Crabill told the gathering that 2016 was another excellent year with revenues up to €100m and 320,000 bed-nights booked across Ireland. “Our success is due to the excellent service provided by hundreds of service providers throughout the country. We are pleased to say that 2017 has been progressing well and we are looking forward to exceeding 2016 levels despite external matters such as global terrorism and market fluctuations. A major strength is our size which enables us to negotiate excellent value-for-money packages. With the largest range of tour programmes for those visiting Ireland, we can bring visitors to many areas and attractions not covered by other tour operators. This includes many rural communities throughout the country. The response from our hotels and visitor attractions to the feedback we gave them has been very well received. Our wish list for 2017 would include training and accreditation for tour guides and more development of hotels for the main tourist hubs. Based on the fact that the economy in the United States, our largest market, is growing strongly, together with a substantial increase in the number of available passenger seats to Ireland, we are optimistic that 2017 will see further growth in our business”.