Trending
You are at:Home»Food and Beverage»Shell shuck: Cliff Town house showcases the variety to be found in Irish oysters 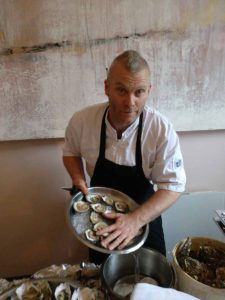 Cliff Townhouse showcased their Sixth Annual Oyster Fest in the company of producers Diarmuid Kelly from Galway and Gerry O’Halloran from Clare.

Host Hector Ó hEochagáin told the audience: “we are right in the heart of Dublin here, talking about how these oysters came out of the sea hours ago. I wanted to let the audience know that such an export of our country, that these oysters can be in Hong Kong or Dubai or Miami, and that these fishermen are rearing these and growing these. It’s incredible. Ireland is a unique part of the world.”

“It is not about the chefs,” head chef Sean Smith (pictured) said. “It is about recognising what we have around us.  The guys working the event are playing a blinder. It is not easy work, you know? But they’re bringing things from the sea. People in Asia recognise it, people in Europe recognise it, particularly the French.”

Cliff House General Manager Adriaan Bartels said the festival was timed for  when people are coming back from holidays.

They are now available in the Cliff Town House restaurant.

Cliff House in Ardmore has a Michelin Star and four AA Rosettes. The group expanded to Cliff Town House and Cliff at Lyons last year.