William’s great uncle, Edward Harland, was one of the main men behind the ill-fated liner and Belfast’s strong industrial heritage. The teenager travelled over from Berkshire in England to learn more about shipbuilding at Titanic Belfast, an attraction which welcomed its three millionth visitor last August. 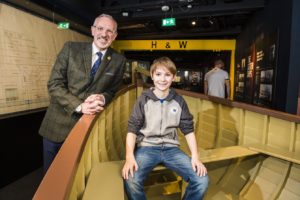 Faye Harland, William’s mother, said: “William loves everything to do with Titanic and wanted to learn more about his family’s heritage and legacy – where better to do this than Belfast. It was great for him to see and learn first-hand about its shipbuilding and industrial heritage and his family’s role in it.”
Tim Husbands, Chief Executive of Titanic Belfast, said: “We not only tell the story of how the world’s most famous ship was built, designed and launched, but also the story of Belfast and the personal stories behind it. There are literally thousands of fascinating connections to Titanic but to have one of the Harland family with us is an honour.”