Tour American Managing Director Mary McKenna is to run for election to the council of Dublin Chamber, the business organisation which advocates for commerce in the capital.
“I don’t know what my chances are, but I’ve been asked to go for it, so I thought ‘why not’?” Mary McKenna told Travel Extra. She has already worked with the Chamber on a charity cycle event last year and enjoyed interacting with business names from a wide range of industries. And while she belives she’s still an outsider, she has strong views on what she’d do if elected.
The Chamber’s council has 20 members, made up of industry leaders aiming to promote business and life in the Greater Dublin Area. The Chamber has taken stands on a number of issues in recent years, including public transport, traffic congestion and Brexit, and conducts surveys on what Dubliners want from their city. Most recently it produced a futuristic vision of what the city could look like in 2050. 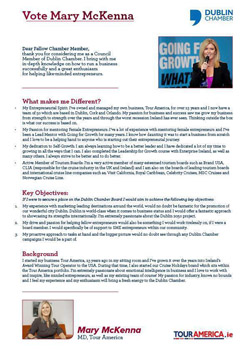 Now Mary believes she can bring expertise from an ouside area – travel – into the wider business world in the capital, and help push for change. “It’s a bit like being a soccer coach or rugby coach, the only way to be part of change is to be involved – like where is the city going in 2050? Different things in business like rates … I think that, being part of it, I can help and I can challenge people and say ‘why don’t we try this and this’…”
On her style, if she makes it to the board, she adds: “I’m not the sort of person who conforms and I will challenge the status quo.” Watch Mary’s campaign video here.
Mary McKenna will be competing against 19 other candidates for one of the 10 places on the new council.
Voting is open to chamber members and opens on February 5. Other candidates include Dermot Griffin, CEO of Premier Lotteries Ireland; Vincent Harrison, Managing Director, Dublin Airport; Aisling Hassell, Airbnb’s Global Head of customer experience; and Willie White, Chief Executive of the Dublin Theatre Festival.