The new Shannon-Toronto Pearson service has been welcomed by tourism chiefs as Ireland looks to expand its markets in the light of dwindling numbers of tourists from Britain.

Andrew Murphy, Managing Director, Shannon Airport, said: “The decision by Air Canada to introduce a direct service between Shannon and its hub in Toronto is fantastic news for the airport and for Ireland. Canadian tourists are high spenders and businesses along the Wild Atlantic Way in particular will benefit as the route will deliver significant Canadian visitors directly to their doorstep.”

He added: “We were delighted with the encouragement we received from Minister Pat Breen, the Canadian Ambassador to Ireland, Kevin Vickers, and the Irish Ambassador to Canada, Jim Kelly, all of whom were of great assistance, along with Tourism Ireland, in facilitating Shannon Airport’s participation in a recent Trade Mission to Canada and ultimately securing the new service. Their support is very much appreciated.”

Matthew Thomas, CEO of the Shannon Group, who previously worked with Vancouver-based Vantage Airport Group said: “Securing this direct Canadian service for Shannon has been one of our top priorities for some time now. The arrival of the service further strengthens our long haul connectivity and enhances our links with what is the world’s largest group of airlines, Star Alliance.” 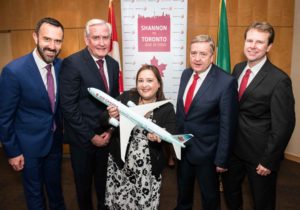 The Canadian Ambassador to Ireland, Kevin Vickers, said: “Last year I had the pleasure of meeting Shannon Group’s Chairman and CEO in County Clare. I experienced first-hand the incredible heritage and tourist attractions and I know they will prove popular with Canadian visitors.  Equally, Canada is a wonderful place for holidays and business and I look forward to seeing increased levels of tourism and trade because of this great new initiative.”

Trade Minister Pat Breen said: “As Ireland’s seventh largest trading partner outside of the European Union, direct services like this provide Irish companies with improved access to international markets. I look forward to welcoming the first visitors from Toronto when the new service takes off next summer.”

Niall Gibbons, CEO of Tourism Ireland, said: “Air Canada’s announcement today of new flights from Toronto to Shannon and from Montreal to Dublin is really good news for Irish tourism as we plan for 2018 and beyond. Last year, Canada delivered a record 203,000 visitors to the island of Ireland, an increase of 11pc on the previous year. In fact, visitor numbers from Canada have grown by almost 28pc since 2014.”

“Today’s announcement is crucial in continuing and growing our political and economic partnership with Ireland. These new routes and the expansion of existing routes will help our Canadian businesses take advantage of the opportunity that CETA will bring on the 21st of September,” said François-Philippe Champagne, Canada’s Federal Minister of International Trade.