The Tourism Ireland website, Ireland.com, beat completion from Mauritius, Tunisia, Thailand and the Maldives. The voting was carried out by 221,000 internet users in France and by a panel of web and travel industry experts.

This is the fifth time that Tourism Ireland has won a Travel d’Or award from the e-tourism industry in France, winning in 2011, 2012 and 2015 and 2017. Ireland.com is available in 11 different language versions for more than 29 individual markets around the world. In 2018, Ireland.com attracted 20.3 million visitors.

Monica MacLaverty, Tourism Ireland’s Manager Southern Europe, said: “Given the huge part that the internet plays in peoples’ research, planning and choice of holiday destination, it is essential that our site is as good as, or better than, those of our competitors. Winning this award for a fifth time highlights that we are up 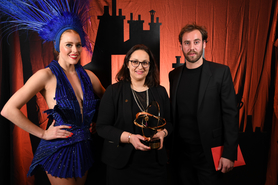 there with the best and I am confident that our strong online presence will continue to motivate more French people to choose the island of Ireland as a holiday destination.”

France is one of the top four markets for tourism to the island of Ireland and 2018 was another record-breaking year for French visitor numbers to Ireland. Monica MacLaverty said: “2018 was the best year ever for tourism from France to Ireland, when we welcomed about 564,800 French arrivals. For 2019, we are rolling out an extensive programme of promotional activity, to keep the momentum going and build on that growth.”

Lufthansa was named best airline at the ceremony, while Club Med – represented in Ireland by Sunway – was voted best tour operator.