Tourism Ireland CEO Niall Gibbons said the Metro linking Dublin Airport to the city centre and suburbs is vital for the expanding capital.

He was making his inaugural speech as President of the Dublin Chamber business association at an event in the city attended by Taoiseach Leo Varadkar, and ambassadors Robin Barnett from Britain and Brad Borgess from New Zealand. 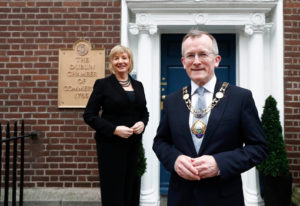 Mr Gibbons said the Chamber and the Northern Ireland Chamber of Commerce will lead a joint delegation of business leaders to Washington DC during St. Patrick’s week to show that this island is “open for business and to restate the importance of the Good Friday Agreement as the basis of prosperity.”

He also used his speech at the Chamber dinner to call on Government to get the MetroLink rail system for Dublin moving.

He said: “We cannot afford for the MetroLink project to be delayed. The time is now for our decision makers to take an ambitious leap in terms of the transport infrastructure needed to take our capital city to the next level.

“Metrolink is efficient, environmentally friendly and the best move toward city sustainability that we can make for Dublin.”