Trending
You are at:Home»Aviation»Tourism Minister Shane Ross ‘needs to get off his rear end’ on Brexit talks for Irish airports, claims FF

Tourism and Transport Minister Shane Ross has come under fire from opposition counterpart Robert Troy as Fianna Fáil launched its policy paper, ‘The Brexit challenge for aviation in Ireland’ at the Dáil.

The opposition party says there’s a real danger of a hard Brexit, with Britain exiting the European Union’s Open Skies Agreement, which enables EU carriers to operate freely to and from British airports. It also said there’s a threat from other EU countries responding in a retaliatory way to Brexit and “huge potential for diverging Member State interests in the Brexit aviation negotiation”. 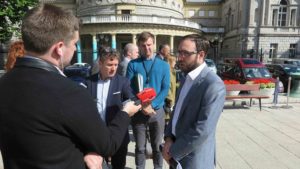 Fianna Fáil Spokesperson on Transport, Tourism and Sport Robert Troy with party paper The Brexit Challenge for Aviation in Ireland

Mr Troy has called for Irish Government negotiators to make it clear that Ireland’s interest is in maintaining a fully liberalised aviation market between the EU and Britain. The paper said that Britain currently has 155 Air Service Agreements, 42 of which are through its membership of the EU. Once Britain leaves the EU, a new Air Service Agreement will have to be put in place between the EU27 and Britain which could affect any one of these rights and constrain the ability to fly easily between Ireland and Britain.

“So far, the signs are not good with warnings from key players in the EU that Britain’s decision to exit the EU will have consequences and implications for aviation,” the paper argued. It added that Ireland must work closely with its European partners, especially Spain, Italy, Portugal, Greece and Central European countries, to ensure that the Brexit agreement with regard to aviation retains as much of the status quo as possible.

Deputy Troy claimed about EU aviation talks: “There’s a lack of priority being afforded to it by the Government at present, it’s not high on the agenda. We need the Government to ensure an aviation deal is high on any negotiations. We think he [Minister Ross] should be far more engaged in consulting with his counterparts throughout Europe, particularly Spain, Portugal, Italy and Greece, countries which heavily rely on Open Skies to support their tourist industry.” The Department of Transport and Tourism has refuted the claims, insisting that it’s working at the highest level with the EU and stakeholders.

With Ryanair boss Michael O’Leary warning that the industry needs to know where it stands soon, Mr Troy added: “At the very latest we need to see what the future holds by March 2018” in advance of Britain’s full exit a year later.

In hard-hitting claims about the Government’s stance so far, he said: “We’re saying quite clearly that Minister Ross needs to get off his rear end, go out and negotiate with his counterparts. We know he met none of his counterparts prior to me submitting a parliamentary question about who had he met to discuss the challenges of Brexit, then he got on a plane and met three within the space of a week.”

And he said Fianna Fáil believes the Ryanair boss is right in his dire predictions of Britain being cut off from Europe as things stand. “I would place more emphasis on what Michael O’Leary says about the aviation industry than Minster Ross does. He [Mr Ross] brought together the world leaders from leasing, from aircraft, from international airports all together to Dublin Castle. He came in, gave a 20-minute speech and left before he heard what they had to say,” the deputy claimed.

Fianna Fáil is also calling for the new runway plan at Dublin Airport to be speeded up, and a shake-up of passport control areas. “One of the big restrictions is that fact that our new runway has been parked because we’re waiting for the EU noise regulation directive to enshrine the Irish Aviation Authority as the competent authority to deal with noise. The statutory instrument needed to do that was promised by Minister Ross in September 2016 that it would be done in a number of months. Twelve months on and we’re still waiting for that.

“Capacity at Dublin Airport needs to be addressed. All we’re waiting for is the minister, who likes to sit on the sidelines, to say how he’s going to take advantage of the aviation sector and meet those challenges.”

The Department of Transport responded to the claims in a statement, saying: “The agreed Brexit negotiating guidelines indicate that the future relationship of the UK with the EU, including in sectoral areas such as aviation, will not be negotiated until the terms of the UK’s exit are finalised. The future status of the UK’s involvement in the European Single Aviation Market and the possible impact that Brexit will have on Aviation will largely depend on the outcome of the future relationship negotiations with the UK.”

The statement added that Minister Ross has had high level talks on the issue, saying he met with Transport Commissioner Violeta Bulc in June “at which he discussed Brexit and aviation issues with her, including his views on transitional provisions in order to minimise any disruption to tourism and trade.  The Minister is planning to meet the Commissioner again in October to hold further discussions on Brexit issues in the transport sector”.

The statement said Mr Ross chaired the All Island Dialogue on Transport & Logistics on 23 January in Dundalk “at which the seriousness of the aviation challenges arising from Brexit were also identified”.

It said that the EU Brexit team, under Michel Barnier, “has been briefed on the serious implications for the transport sector in Ireland including aviation. A team of senior officials from Department of Transport, Tourism & Sport, Department of the Taoiseach and Department of Foreign Affairs & Trade also met with the Barnier team in  June 2017 to verbally brief them and to answer any questions they had. A significant part of the meeting addressed the implications for the aviation sector and for Irish airlines.

“The Department has undertaken risk analysis and stakeholder consultation, at national and EU level, with a view to planning for all possible scenarios and will continue to do so. A Working Group comprising representatives from Irish airlines, airports and regulatory bodies, including officials from the Department, is finalising a paper which will consider the implications of the UK exiting the European Single Aviation Market without alternative access arrangements being put in place at EU level. The recommendations of this key stakeholder Working Group will be considered by the Department once their paper is finalised.

“Ireland’s priority when involved in the negotiation of any new aviation agreement will be to protect a fully liberalised and  deregulated market in order to ensure no erosion of our connectivity or disruption to airlines, airports, business, tourism and personal travel.”