A Malaysia-bound aircraft had to turn back to Saudi Arabia after a passenger realised she had left her baby in the terminal. Watch here the air traffic control conversation.

British Airways captures the moment that its latest aircraft repainted in Ireland – The 747-400, registration G-CIVB – arrives in Heathrow from Dublin in its new colour scheme. Watch here.

CEO Akbar Al Baker got into hot water over his views on American cabin crew, a story broken by Travel Extra, now Qatar is in safer territory, showcasing its own all-female flight crew. Watch here. 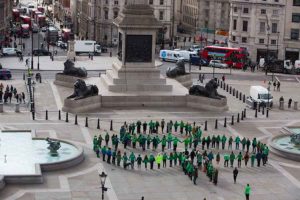 Ryanair teams up with the boys of St Brendan’s College in Killarney to wish passengers a happy St Patrick’s Day. Watch here.

The Commission of Aviation Regulation says compensation is ‘very unlikely’ to apply in the case of Boeing MAX cancellations but care and assistance applies. The case for compensation could yet end up in the courts meaning another headache for Norwegian who had to rescue its Irish Boeing 737-MAX 8 passengers from New York using a Dreamliner this week.

A week which started with tragedy quickly developed into farce. The 157 which died on Ethiopian Airlines Flight 302 included Mick Ryan from Lahinch, the first from Ireland to die in an air disaster since Edel Byrne Mahedy from Palmerstown on board Malaysia Airlines Flight 17 in July 2014. The aircraft was brand new, and was ferried through Dublin on November 15 en route to Addis.

The implications for Boeing’s MCAS system were noted immediately. By Wednesday all Boeing 737-MAX had been grounded. The USA was last to move, after Marc Garneau, Canada’s astronaut transport minister, had acted, leaving it flying for three days after it was grounded elsewhere before President Donald Trump stepped in. This led to renewed accusations that American regulators had become too cosy with Boeing, which is the USA’s largest exporter by value.

Initial suspicions turned to the MCAS stall recovery system used on the MAX, a software flaw which will probably be resolved, as battery problems in the 787 Dreamliner were in 2013. Things became more complicated on Wednesday when refined satellite tracking data from Aireon (with which the IAA is a partner) suggested a similar pattern to the Indonesian crash where the pilots fought a losing battle against anti-stalling software that forced the plane’s nose down at least 20 times, suggesting the autopilot/autothrottle is also under suspicion. MCAS only activates if the autopilot is turned off.

Boeing had advised pilots to disengage autopilot in nose-down incidents, although MCAS initiates nose-down in response to stall incidents. After the crash of Lion Air Flight 610, Boeing issued a bulletin warning pilots that the angle-of-attack sensor can produce erroneous signals, causing the MCAS system to put the plane in a steep dive. The bulletin gave detailed instructions for disengaging the MCAS system in such cases. Currently, based on satellite tracking data, aviation experts believe the MCAS system may have been deployed erroneously when Ethiopian Airlines Flight 302 crashed

In the aftermath of the MAX groundings, Norwegian scheduled a Boeing 787-9 Dreamliner on Dublin to Stewart international until April. 30, with Providence passengers bussed (about three hours by road)  The current schedules from May 1 have three instead of four aircraft planned with Stewart reduced from 14 to 10 weekly, while Halifax has been delayed until May 1 and reduced from 7 to 4 weekly. All bookings are essentially suspended for the summer. The implications for Shannon and Cork are still unclear. Norwegian say that Boeing will have to pay for the costs of the disruption.

Ryanair has ordered 135 B737 Max 200s, a modified version of the Max 8, and has options on 75 more. It is due to take delivery of the first in April, two in May, two in June and then 50 more before the 2020 summer season. Juliusz Komorek said in Warsaw: “It is too early to say if Ryanair would try to cancel its order. There is no risk for Ryanair’s summer programme. Our fleet of 450 includes a lot of emergency aircraft, which are located strategically.”

Boeing’s crisis has been compared with the withdrawal of McDonnell Douglas DC 10 certification in June 1979 or even the withdrawal of the de Havilland Comet in 1954 (English regulators blissfully blamed pilot error while a quarter, 26 of 113 comets, crashed). The crisis has not yet climbed to that altitude, but, as one pilot noted this week: “737MAX without MCAS fails the cert demo. 737MAX with MCAS passes the cert demo.”

The FAA said aircraft will remain grounded at least until May until a software update can be tested and installed. The 737 series makes up a third of Boeing’s profits and most of its order book. Until this week the Max 8 had been a commercial triumph, with 370 in operation and 4,700 more on order. Boeing has $12.7bn of cash and the financial nous with the banks to steer it through the bumps. Whether airlines like Norwegian and Jet Airways in India have the same resilience remains to be seen.

There was general dismay at the news that Dublin Port Company is threatening to reduce to 80 the number of vessels to call at the port from 2021, the same number as 2010 and compared with the 160 cruise ships scheduled to call this year. They say this is due to the increase in freight business; 36pc in the last six years, rather than anticipated Brexit/breat-imeacht issues. There are 140 already booked for 2020. The port authority said that if more ships were to be allowed in the future it would be dependent on new berths being constructed and this would require co-financing or long-term financial guarantees from cruise lines. 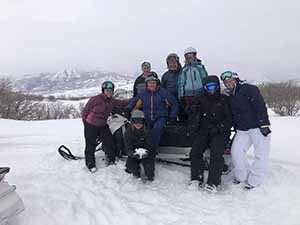 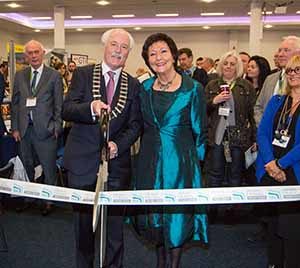 There will be 49 newcomers among 128 exhibitors at the official Irish Travel Industry Trade Show, Ireland’s biggest travel trade event. Endorsed by the ITAA it takes place on March 21 at RDS Hall 3, Main Hall Complex, Angelsea Road, Ballsbridge, Dublin D04 AK83. The entrance gate is located on Anglesea Road opposite The Herbert Park Hotel. 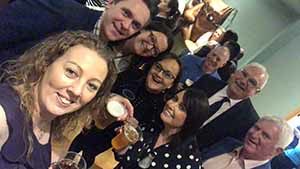 Topflight hosted key travel trade at Mario Rosentock’s In Your Face nationwide tour in Limerick, Cork, Kilkenny, Galway and Killarney, complete with dinner in an Italian restaurant and an Italian themed gift at the end of each night. The final night in Killarney saw Topflight’s Shauna Kelly join Mario on stage. Picture shows Maurice Shiels, Shauna Kelly and agents in Cork. See more pictures here or connect with the album on Facebook. 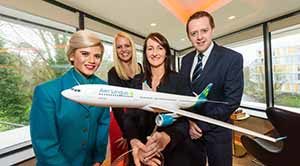 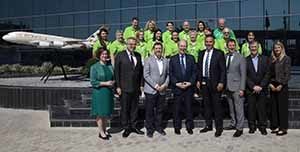 Nashville Convention and Visitors Corporation hosted the travel trade and media for an evening of all things Nashville at the Wiley Fox on Monday March 11th with celebrated Nashville songwriter Kelly Archer providing the tunes on the night. See more pictures here or connect with the album on Facebook.

Dermot Merrigan describes the Travel Industry Golf Society first outing at St Margarets on Friday next as a pressure free team event to start the season off.  Tee times are between midday and 2pm, with a three course meal following golf for €50. “Anyone interested in coming along, we’d be delighted to welcome them.  All that’s needed is to pop an email to tigsgolfsociety@gmail.com.  Note that guests are very welcome too so anyone can bring a friend.”

Father Chad Partain will conduct the annual Blessing of the Beer for St Patrick’s day at a pub called Finnegan’s Wake, in Alexandria, Louisiana.

Disney’s much-anticipated Star Wars attraction Galaxy’s Edge will open ahead of schedule in Hollywood on May 31 and Orlando on Aug. 29 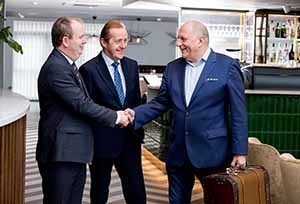 The 80-bedroom Aspect Hotel, Kilkenny was renamed as The Hoban Hotel-by the Prem group which purchased it last year, after a €1m refurb to overhaul the reception area, bar, restaurant and casual lounge at the ground floor level, overseen by TV architect Hugh Wallace. A central bar and coffee dock anchors the space while restaurant seating was increased to 117 with a combination of banquette seating, bistro and refectory style tables. Picture shows Hugh Wallace, PREM Group CEO, Jim Murphy and Hoban Hotel’s General Manager, Clement Gleeson. 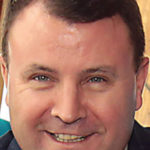 Turkish Airlines will start its moving operations from Atatürk Airport on  April 6 2019 at 02:00 (LMT) in order to carry out all scheduled flights from Istanbul (New) Airport and from 14:00 (LMT), all scheduled flights will be carried out from Istanbul (New) Airport. As of April 6 2019, Istanbul (New Airport) will be displayed with IST code across reservation systems. Due to moving operations process, some of our flights have been cancelled.

Ryanair Sun will rebrand as Buzz in autumn 2019, operating on a Polish Air Operator’s Certificate and reviving the name of the former KLM subsidiary which Ryanair purchased and which ceased as a separate brand in 2004. Buzz’s fleet currently includes 17 aircraft, growing to 25 aircraft in summer 2019.  Did Ryanair close down the original Buzz? No said David O’Brien (watch here). No said Michael O’Leary (watch here), having earlier commented that Buzz was a flake (watch here). The new Buzz will continue providing best in class charter services and operating scheduled Ryanair flights. Is it coincidence that the name sounds so like Ryanair’s biggest competitor in Eastern Europe, Wizz?

Aer Lingus A321 delays have resulted in approx 50,000 seats removed from the summer 2019 schedule. The ASL operation for Aer Lingus was given a reprieve  as US Department of Transport postponed the termination of wet-lease operations by EU carriers until August.

Aer Lingus expects 63pc of its Trans Atlantic growth over the next five years will be in established routes, through adding frequencies or upgauging, as it plans to increase its North Atlantic ASKs at a CAGR of 11pc pa from 2018 to 2023 and take its annual seat capacity in this route group from 2.8m to 4.7m.

Cherbourg Port was lit up in green for the WB Yeats cruise-ferry maiden voyage Dublin-Cherbourg voyage, the  first of up to four crossings per week. 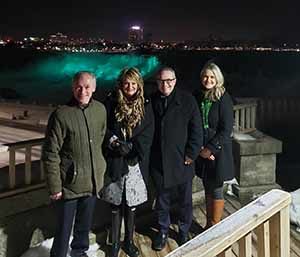 It started nine years ago with an idea by Tourism Ireland to light up the Sydney Opera House in green. This year St Patrick’s Day will see 470 sites in 56 countries lit up in green, compared with  245 sites/38 countries in 2018, 278 sites/44 countries in 2017 and  200 sites/30 countries in 2016. Picture shows Minister Richard Bruton having switched the green lights on Niagara Falls with Sandie Bellows of Niagara Parks, Jim Kelly, Ambassador of Ireland to Canada; and Dana Welch of Tourism Ireland, 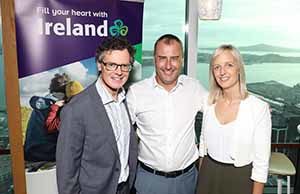 CSO figures showed a 6pc growth in spend by overseas visitors and 11pc growth in overseas holiday visitors in 2018 to the 26 counties. N America number were up 13% and spend up 14pc, Europe was up 10pc, other up 7pc and Britain up 1pc with spend down 2.6pc.  “Currency fluctuations and the continued uncertainty around Brexit, which remains a real concern,” Niall Gibbons of Tourism Ireland says.

Travelzoo broadcast from Limerick on the lead up to St. Patrick’s Day, along with 15 US television slots for the city.

The National Tourism Development Authority has so far this year provided Abbey Theatre masterclasses for over 17 head tour guides through the theatre’s ‘Theatre Skills for Business’ programme.

According to the Irish Self Catering Federation,  2,000 tourism jobs are under threat as a consequence of the new legislation proposed for self-catering accommodation units.

US escorted tour around the Grand Canyon region, 6 breakfasts and 4 dinners with wine, expertise of a knowledge travel director, 6 nights accommodation in centrally located hotels, Navajo guide in an open air vehicle, boat ride through Lake Powell, dinner with a view overlooking the South Rim of the Canyon. *Flights excluded, from €2139pps, depart August with Insight Vacations on http://itaa.ie/2019/03/12/enchanting-canyonlands-with-insight-vacations-5/