Edmund Hourican and Maureen Ledwith receive the service to the industry award at the Irish Travel industry Awards at the Round Room, Mansion House, Dublin, January 24 2019 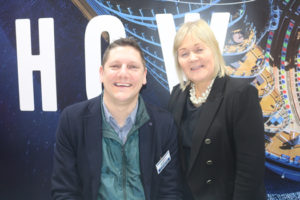 Royal Caribbean‘s MD for Britain and Ireland, Ben Bouldin, pictured with Jennifer Callister, counts down to the launch of the Perfect Day private island, and reveals the interests of Irish passengers. Watch here.

A builder ploughed his digger through a new Travelodge hotel in Liverpool over a pay dispute. Watch here.

The historic clock tower in the Courthouse turret at Hillsborough Castle and Gardens in Co Down is ringing for the first time in over 30 years. Watch here.

South African Tourism has enlisted 12 local guides from across the country to promote the country (one visited Dublin last week; full story below) in the Irish and British markets. View their stories here. 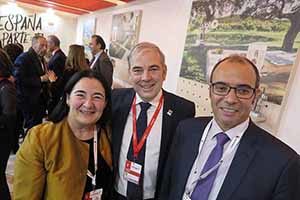 All of the action at Fitur 2019 in Madrid was outside the exhibition spaces, as Madrid’s taxi drivers targeted the event to highlight their Uber-grievances. Watch here the taxi blockade and approach to Feria, which was not without its air of menace and reminded Travel Extra of our days covering conflict zones. The taxi drivers complain that the number of Uber drivers in Spain has risen from 6,711 to 12,125, of which 6,559 are in Madrid,  2,283 in Barcelona, 1,184 in Malaga and 222 in Sevilla, the other 2,877 elsewhere. FITUR in Madrid had 10,190 exhibiting companies from 165 countries/regions, 140,120 trade participants and 7,856 journalists. The wonderful Heath Robinson Madrid stand of 2018 was replaced by a cleaner whiter space, and other regions were forced to downsize as the taxi drivers prevented the delivery of their showcase materials to the venue.  Ireland was represented by Abbey Tours and Joe Walsh Tours. Fitur is Donald Trump’s worst nightmare. The Mexico stand explodes into every orifice of Hall 2, the North America hall. The bits that Mexico has not covered are filled by Republica Dominicana, Peru,  Colombia and everywhere else. The entire USA is dwarfed by Bahai, a province of Dom Rep, and Puerto Rico is the nearest thing to an identifiable USA product on offer. It was a serious networking day to connect with Gonzalo Ceballos and minister for tourism Reyes Maroto, and Teresa Gancedo with Spanish Tourist Board CEO Hector Gómez. Travel Extra met up with Jose Manuel de Juan, who set up the Spanish Tourist Board office in Dublin. He now heads up Spanish TB in New York and ironically competes with Ana Celina Tavares representing Portugal. Picture shows the three directors of the Spanish Tourist Board in Dublin, Teresa Gancedo (2016-), Gonzalo Ceballos (2011-16) and Jose Manuel de Juan (2006-11). Watch here video of the event. See more pictures here or connect with the album on Facebook. 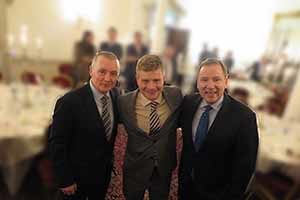 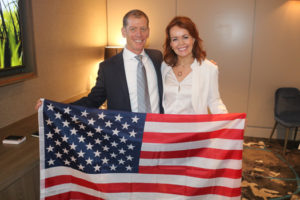 American Airlines is moving to partner with Aer Lingus on transatlantic routes, Tom Lattig, MD of EMEA Sales, pictured with Country Sales Manager Caitriona Toner, said as the carrier celebrated the upcoming new route from Dublin to its main hub in Dallas. Full story here.  See more pictures here or connect to the album on Facebook. 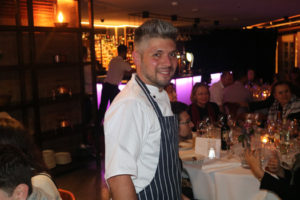 TV chef Damian Wawrzyniak cooked dishes from Lodz, Gdansk, Krakow and Warsaw for trade and media to promote tourism to Poland’s cities. See more pictures here or connect with the album on Facebook.

Czech Tourism hosted members of the Irish travel trade and media in the country’s embassy on Northumberland Road on Wednesday January 23rd to launch their Different Cities 2019 campaign. Guests were asked what they first thought of when they thought of the country – answering ‘Prague’. They were encouraged to take the road less travelled with stunning views and tales of Ostrava, Kutna Hora, the revitalising appeal of Karlovy Vary (one of the largest spa towns in the Czech Republic) and the lofty appeal of Hotel Jested which is built atop a mountain in Liberec. See more pictures here or connect with the album on Facebook. 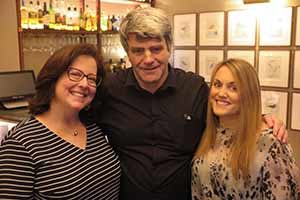 US Travel’s dynamic duo, Washington DC based Cathy Reynolds and London based Jo Thomas hosted Irish media at the Lucky Duck in Aungier St to promote IPW 2019 in Anaheim. Last year’s Irish media delegation was 9 and they are looking for five more in 2019 in Anaheim where 6,000 delegates and 500 media will congregate to hear of what US inbound tourism has to offer. The British media delegation of 44 has already been filled. A far cry from when Travel Extra was one of just two media delegates form Ireland to attend IPW.

See pictures here from the maiden voyage of WB Yeats, a European bank loan of €155m helped fund WB Yeats and a new ship, to be world’s biggest passenger ferry for car capacity, or connect with the album on Facebook.

Watch here– Video diary of Holiday World Belfast . Listen here– to Travel Extra’s Eoghan Corry speaking on BBC Good Morning Ulster about holidays from the north in 2019 amid the uncertainty of Brexit.

Azealia Banks’ tirades against ugly Irish women, Aer Lingus and the Famine have done more for the airline than years of marketing campaigns as the row went viral around the world. 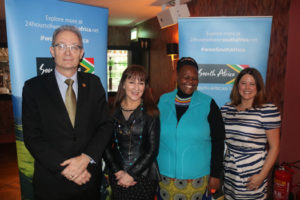 If anyone can make you visit South Africa, it’s tour guide Thoko Jili, from KwaZulu-Natal, who’s got an infectious love for her province and country. She’s one of 12 tour guide-ambassadors chosen by South African Tourism to attract more visitors in the ‘Meet Your South Africa’ campaign, after surveys found that would-be visitors wanted to hear real stories from real people. Thoko Jili was in Dublin along with members of the Embassy in Dublin and Rachel Lewis from SA Tourism in London. Pictured are Willem Geerlings, Counsellor at the South African Embassy in Dublin; Elizabeth Mulville, Information Officer at the Embassy; Thoko Jili; and Rachel Lewis, Campaigns and Partnerships Manager, South African Tourism, at the Iveagh Garden Hotel. Watch here for Thoko Jili interview. See more pictures here or connect to the album on Facebook.

Bali is to introduce a tourist tax to help pay for tackling pollution – the Bali Environment Agency says 3,500 tonnes of rubbish are produced a day.

Bahrain plans to construct the world’s largest underwater theme park with a submerged Boeing 747 as its centrepiece.

The Maldives government has issued safety warnings to hotel resort owners after five tourists died in a single week in a series of snorkelling drownings this month.

Investigators fear that a blaze in a hotel which killed two in the French ski resort of Courchevel may been started deliberately.

Leading chefs speak out about the downside of running a destination restaurant – with Copenhagen’s Nobu getting 1,000 emails for bookings in a single month.

Hainan Airlines has confirmed the report, first carried in last week’s Sunday Supplement, of a new direct service between Dublin and Shenzen. The Dreamliner service, beginning on February 25, will depart Dublin 9.30am Mondays and Fridays as HU756. Inbound HU755 departs the southern Chinese city at 1.30am local time.

Dublin-based Stobart Air, whose operations include Aer Lingus Regional,  made a €3.3m pre-tax profit, compared to a €10.5m loss in the previous 14-month financial period. 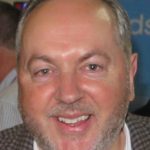 Clem Walshe‘s Local Marketing is promoting Jetline Cruise Ireland, the Irish arm of the agency that combines cruise trips with land-based breaks.The company also has themed cruise/land packages, including a music capitals-based package to the US and Caribbean, plus partnerships with rail operators including the Venice-Simplon Orient Express and Rocky Mountaineer.

TV presenter Holly Willoughby will host the naming ceremony of MSC Bellissima in Southampton on March 2. Locally-born singer Craig David and Nile Rogers and his band Chic will provide the entertainment.

Carnival Mardi Gras, due next year, will feature six themed zones, including a French Quarter, Italian-themed piazza as well as an adventure zone.

Sinn Féin wants submarines banned from the Irish Sea after a British nuclear vessel had a near-miss with the Stena Superfast VII between Belfast and Stranraer. 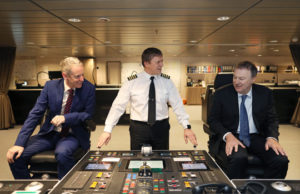 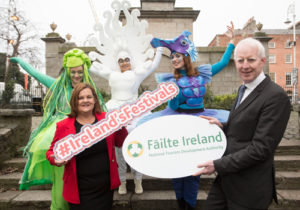 The former tenement house at 14 Henrietta Street in Dublin, which is now a museum, has been shortlisted for the European Union Prize for Contemporary Architecture – Mies van der Rohe Award 2019, one of just 40 projects selected from nearly 400 nominations across Europe. 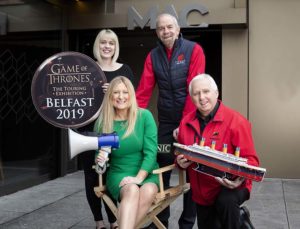 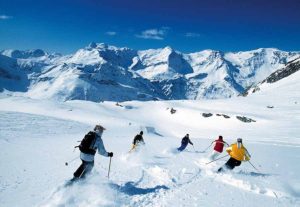 Cassidy Travel and O’Hanrahan Travel won the agency awards  at the 2019 Irish Travel Industry awards which were presented at gala function in the Round Room, the Mansion House, on Thursday January 24 2019.

Contribution to the Industry award:  Edmund Hourican and Maureen Ledwith.