Trending
You are at:Home»Ireland inbound»Trees a crowd: Longford Forest resort will have capacity of 1,800 holidaymakers
An Bord Pleanála is to give the go-ahead to €232m holiday village in Co Longford after a planning appeal. The development has been allowed to proceed subject to 20 conditions, none of which are believed to affect the developer’s plans to proceed. 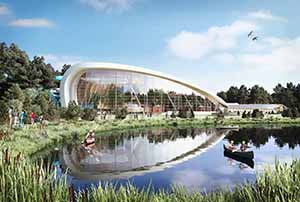 Artist’s impression of the Subtropical Swimming Paradise, viewed across the lake

In its 60-page ruling the board said the project would not adversely affect the biodiversity of the area, traffic control or infrastructure and water quality issues, as long as conditions set down are put in place. Watch here Travel Extra‘s Eoghan Corry speaking about the deicison on the RTE six-one news.

London-based Center Parcs has said it will create 1,000 permanent jobs and 750 positions during the construction site. At full capacity, the finished resort will house the equivalent of the population of nearby Ballymahon, 1,800.

Center Parcs London issued a written statement saying it will now move to the public procurement process for the building contracts and expected an opening date in 2019. “Once open, the forest holiday village will have capacity for up to 2,500 guests and employ up to 1,000 people in permanent jobs“,

Longford County Council granted planning for the development in Newcastle Woods last February, with plans for 470 lodges, 20 apartments and a 30,000sqm complex to include an indoor swimming pool plaza. There were three subsequent objections to the project from residents in Longford and Mullingar and An Bord Pleanála is now to rule on these appeals. 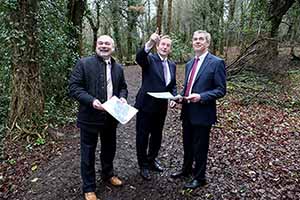 The finished resort promises 100 indoor and outdoor activities, a spa, restaurants and cafés and the Subtropical Swimming Paradise, with water rides.

Center Parks London has a turnover of €400m operates five campsites, the flagship being the smallest, Woburn Forest near a safari park within driving distance of London.

The company shares the same name and common booking website with its former parent Center Parcs, based in Rotterdam, which has 21 holiday villages in the Netherlands, Belgium, Germany and France. Center Parcs evolved from a camping and sports business started by Dutch entrepreneur, Piet Derksen at Lijnbaan, Rotterdam in 1953. In 1968, Derksen purchased woodland near Reuver so staff and customers could relax in small tents on a forestry site. Derksen sold his English operation in 1988 within 18 months of opening his first English resort and it succeeded in buying out an opposition forestry accommodation in Cumbria in 2001. 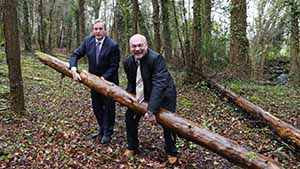 Martin Dalby, the chief executive of Center Parcs London, stated in a 2008 interview that if a sixth village was considered it would probably be located in Ireland.

He said Woburn, identified in 2004 and constructed last year, would be the last village the company constructed in England. The announcement of the Longford location was made in September 2015. At 470 lodges it will be the smallest of the parks.

The development represents Coillte’s first venture into a tourism joint venture. Coillte recently put another holiday village and equestrian centre at Lough Oughter on the market and is expected to fetch in the region of €1 million.

Despite Brexit implications, the English based firm says it is committed to going ahead with the project if it gets planning. Mr Dalby said it is expected that many of the jobs will be filled locally and that when operational the site will add around “€32m to Ireland’s GDP per annum”.