Trending
You are at:Home»Aviation»Turkish Airlines and DAA hope for a good innings as they see off Irish cricketers playing in Lords

Turkish Airlines, new sponsors of the Ireland men’s senior cricket team, and the Dublin Airport Authority saw off the squad at Dublin Airport before their key games against England in Bristol and Lords. 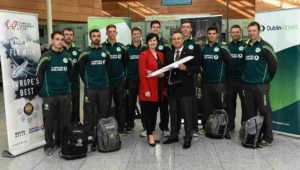 The team is making history, and will the Irish cricket team to play in the spiritual home of the sport. The team, who travelled out from Terminal 2 to England, were met by Hasan Mutlu, General Manager Of Turkish Airlines in Ireland, and Edel Redmond of the DAA.