Trending
You are at:Home»Aviation»United to switch to largest Dreamliner model on Newark-Dublin route

Dublin is one of six transatlantic routes that will be served by United Airlines’ new Boeing 787-10 aircraft from its Newark hub for summer 2019.

The aircraft has 44 United Polaris business class seats, 21 United Premium Plus seats, 54 Economy Plus seats and 199 standard Economy seats. Tickets will be available for purchase on December 3.

The airline is rolling out the Polaris product across its fleet, and the airline here, under Ireland manager Martina Coogan, has showcased features of the business class to trade and media. 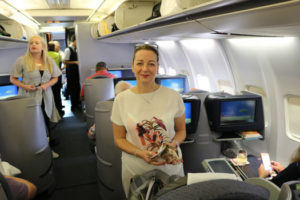 The key difference is that the 787-10 will feature the full Polaris product. That means all aisle access business class, as well as United Premium Plus seats The aircraft also features updated lighting patterns that mimic sunrise and sunset to help customers in each cabin fall asleep and wake up more adjusted to new time zones.

A brand new entertainment system is also available at every seat, which includes split screen capabilities to watch a movie and view the flight map simultaneously; a relax mode for customers who want to customise  soothing videos and relaxing audio playlists; accessibility features which accommodates any level of vision, as well as provides support for customers with hearing and mobility issues; and movie and television recommendations based on remaining flight time and previously watched content.

Patrick Quayle, United’s Vice President of International Network, said: “United is proud to offer more seats between New York and Europe than any other carrier and our Boeing 787-10 aircraft based in New York/Newark will enable us to connect even more New York City customers to Europe and beyond.”

United previously announced its first 787-10 aircraft will begin operating between New York/Newark and Los Angeles and San Francisco in January 2019.