Tourism Ireland is promoting the island of Ireland this week at the Arabian Travel Market in Dubai, in a bid to grow tourist numbers from the UAE.

The annual event – part of the World Travel Market family – attracts 39,000 professionals from the travel industry in 153 countries each year, and generated €1.8bn worth of business in 2017.
Roughly three-quarters of travel professionals at ATM are trade visitors and buyers, along with 940 media and 2,660 exhibiting companies.

With Brexit still hitting inbound British numbers, Tourism Ireland said it is working hard to raise the profile of the island of Ireland in the Middle East and other emerging tourism markets, as a premier holiday and business tourism destination.

Tourism Ireland said that with three airlines now operating direct flights from the GCC to Dublin – Emirates, Etihad Airways and Qatar Airways – Tourism Ireland is reminding prospective visitors about ease of access to Ireland. The organisation is also highlighting the lifting of the visa requirements for UAE nationals who wish to visit Ireland, reminding them that it is now easier than ever before to visit Ireland. 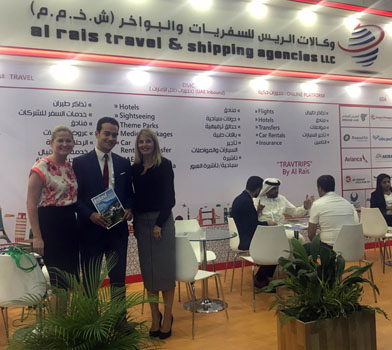 But while Qatar Airways was a prominent exhibitor at last year’s show, the current blockade is still souring relations in the region. Four of Qatar’s Gulf neighbours – Saudi Arabia, UAE, Bahrain and Egypt – continue to impose a blockade on the country.
See also  Etihad named best airline staff service in the Middle East