West Cork has been named the country’s top food region in this year’s Restaurants Association of Ireland Foodie Destinations award. The winner was announced at an event held in the Headfort Arms Hotel in the home of last year’s winners, Boyne Valley.

West Cork, home to the annual Taste of West Cork Food Festival and Cork Character Cafes, beat competition from second-placed Boyne Valley, Kilkenny, Kinsale and West Waterford. The awards were based on regional judging visits and 10,000 online votes. The awards were held in assocation with FBD insurance. 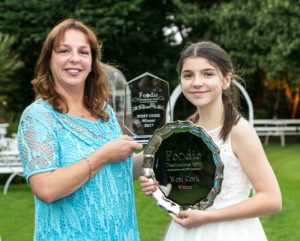 Nora Rice and her daughter Nora Collins, who accepted the award on behalf of West Cork at the Foodie awards

This year’s judges were Zach Gallagher and Wendy Kavanagh, founders of Irish Food Tours. “The excellent collaboration between food provider, chef and food producer with the tourism industry is generating amazing potentials for the future development of Ireland as a world class food destination,” said Zach Gallagher.

“The food and tourism offerings all over the island of Ireland and the use of modern media is changing the perception of Irish food as seen from abroad, and this was most evident in the ten regions that reached the Foodie Destinations of Ireland final,” Wendy Kavanagh added. “What really stood out for me was the passion and pride displayed by the people involved at each destination.”

The CEO of the Restaurants Association of Ireland, Adrian Cummins, said: “As food tourism grows in popularity it is great to see so many places putting local food at the forefront of the visitor experience and like West Cork, enhancing their offering year on year. I would like to congratulate West Cork as winners of the 2017 Foodie Destinations award which is sure to further boost their profile as an outstanding food destination.”