Trending
You are at:Home»Travel Trade News»Winner snaps up holiday and camera in Topflight and Canon Ireland competition

A picture of a Hindu holy man has won Kilkenny man Rue Ahmed top prize in this year’s Topflight and Canon Ireland Travel Photographer of the Year competition.

Now in its second year, the competition searched for months for Ireland’s best images from aspiring snappers. The judges narrowed the entries down to a final 24, and the organisers have now named the top three winners. 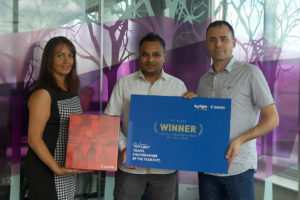 The runner-up was Adrian Megahey from Co Galway. His photo, taken in America’s Yosemite Valley, features the Milky Way curving over Half Dome. Third place went to Paul Brady from Co Kildare with a photograph taken in Dublin of the Bull Island in Clontarf.

The winning prizes were presented at Topflight’s head office in Jervis Street, Dublin. Check out the winning pictures here.