Trending
You are at:Home»Aviation»Au revoir Rouge as Air Canada returns to the Dublin-Toronto route with three-class offering

The Air Canada Rouge service operating between Dublin and Toronto will change to an Air Canada mainline operation from winter 2017, with the company saying the return to the main brand is to cater for the growing number of business travellers using the route.

The year-round schedule will operate a minimum of three flights per week and rise to at least daily when demand increases in peak seasons.

The new service will be on 292-seat, wide-body Airbus 330-300 planes, with the first Dublin departure on Monday, October 30. The aircraft features three cabins with 27 business class seats in a 1-1-1 pod layout, each with aisle access in the front cabin, and 21 premium economy and 244 economy seats in the middle and rear cabins. 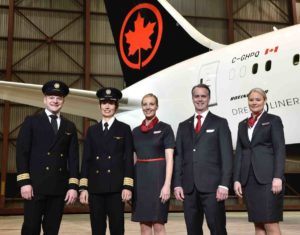 Air Canada to launch on route in October

“We have seen a significant uplift in corporate travel in recent times, and with the signing of the Canada Europe Trade Agreement (CETA) earlier this year, this offering will be of particular interest to business travellers as both Irish and Canadian companies seek to identify and exploit new opportunities in each other’s markets,” said Bláithín O’Donnell, Sales Manager Ireland for Air Canada.

“As 2017 marks the 150th anniversary of Canada and the 80th birthday of Air Canada, it is wholly appropriate that this investment should happen now to demonstrate our commitment to the Irish market.”

For the peak summer 2017 season Air Canada has 14 departures a week to Canada, 11 to Toronto and 3 to Vancouver, all operated by leisure brand Air Canada Rouge. The Vancouver summer route returned two weeks early this year on May 27 following its debut last year.

Flights AC842 Toronto Pearson-Dublin and AC843 Dublin-Toronto Pearson are available for sale now for travel from the end of October through aircanada.com or travel agents