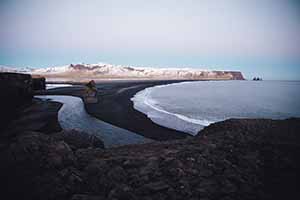 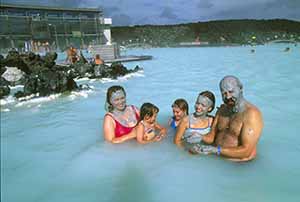 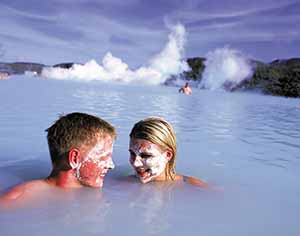 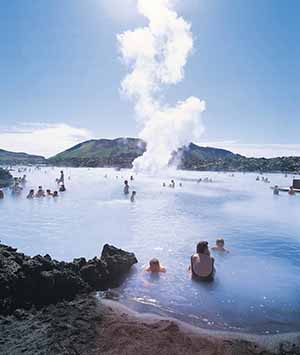 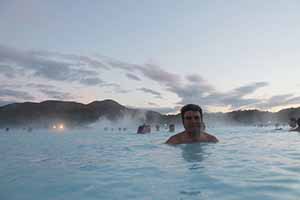 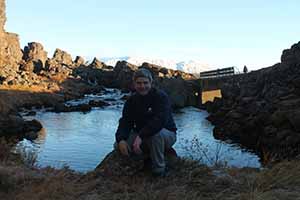 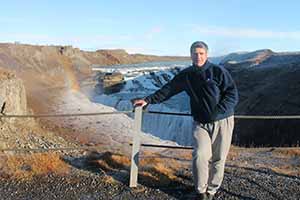 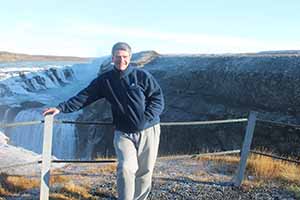 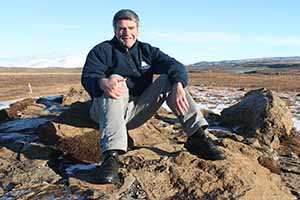 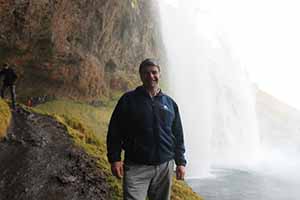 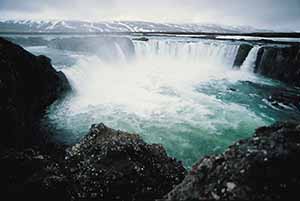 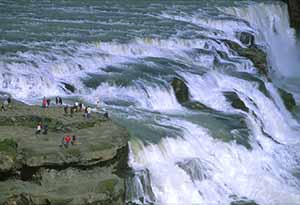 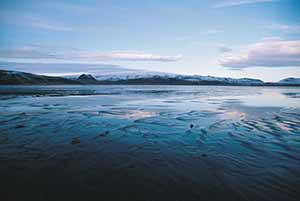 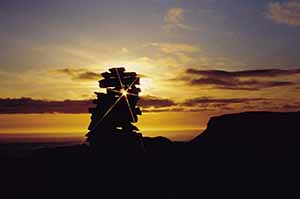 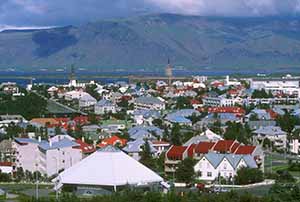 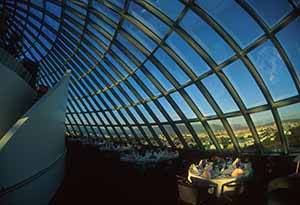 When the unpronounceable volcano Eyjafjallajökull shut down European airspace in April 2010, only one airport remained open. It was Keflavik, the main airport in Iceland. All the ash blew off the island.

They have built a visitor centre in a cowshed beside Eyjafjallajökull to tell the story of the eruption that had newsreaders everywhere stuttering over their I’s and F’s.

Talk to Icelanders about the fiasco, and they give you withering “a welcome to our world” look.

Olafur Eggertsson and his wife Gudny Valberg narrate the video at Þorvaldseyri (Thorvaldseyri) farm, explaining that’s what happens when you live with fire and ice as close companions.

These people are ninth in the world happiness league. It must be down to the neighbours. Since the year AD 1500 about one-third of the Earth’s total lava flow has poured out of the volcanoes of Iceland.

When it came to building a tourist industry, it helped to have such volatile companions. Despite what the geysers and waterfalls might claim, Iceland’s signature attraction is the Blue Lagoon, a giant steam bath that is so close to the airport you could pop in for a dip on a stopover to Anchorage.

Modern changing rooms have been built at the entrance, and when you plod your piggies into the silicon in waste-deep water it is impressive a bath as you will have anywhere.

No self-respecting world traveler nowadays can get by without a photograph of themselves immersed in the warm water with the steam rising and, if you want the full effect, a few icicles as a distant backdrop.

The other star attraction of Icelandic tourism does not always tog out for visitors. When I visited in November the Northern lights had not been seen since October 16.

Not that they told us that when they bussed us out to the countryside.

The standard meat-and-two-Brennivín three-day Iceland tour is built around a cluster of waterfalls (Gullfoss, Seljalandsfoss the narrow one and wider Skogarfoss), a folk museum, and the ancient assembly site Thingvellir (beside the eerie drowning lake, Drekkingarhylur), where they brought us to see the Northern Lights, presumably because they have ample parking space for the coaches there.

They just said they could not be guaranteed. The noisy schoolgirls from Surrey had given up after an hour (“I could have seen the stars at home”). The three busloads sent from Ireland by Travel Department were made of stronger stuff.

our guide, Orn Gudmundsson told us the key was the faint arc that traced the skyline. Once you see that, you have a good chance. All you need is patience. When the lights came they performed and danced.

The northern lights have moods, like all good meteorological phenomena.

The Gods knew we were here, said Orn.

Maybe they favoured us. Our islands are bound up in each others imagination and even DNA.

Iceland is a two hour 15 minute flight away but as close culturally as you might wish. The first settlers, the Papas, where Culdee missionaries. The female DNA traces back to Ireland. St Patrick (Patrek) and Brian Boru (Brjan) have starring roles in their famous medieval sagas as do Örlygur Hrappsson and Esja, who spread the word of Columbanus in the 9th century. Neither of them feature in Irish literature, but St Buo, missionary to Iceland does, and is unknown in Iceland. A case of a deft name change, perhaps?

Icelandic children are as familiar with the story of Irish queen Melkorka daughter of Myrkjartan (Macartan/Muircertach) as they are with any Disney Princess – author Donna Jo Napoli won a prize with her retelling in a 2007 young adult novel Hush: An Irish Princess’ Tale.

Postcard Iceland is rural, the place that fills the tales of their greatest writer an Nobel laureate Halldór Kiljan Gudjónsson (Laxness). His farmstead is another country museum.

Urban Iceland has a lot to offer too. Iceland is two thirds the size of Ireland with a population of just 300,000, the equivalent of counties Limerick and Tipperary put together, and most of those live in the capital.

Reykjavik city had lots of room to spread eastwards and used it. ”We like single apartment houses” said our guide, Orn Gudmundsson. The old centre, if anything from about 250 years old can be considered old, is surprisingly intact. The main shipping and dining streets veer off, two sides of a triangle form the old harbour and the penitentiary that now serves as the prime minister’s office (surprise).

The prices are down from the cracked 1990s, Irish soccer supporters wallets still break into goosepimples when they remember the £6 a pint they paid in the 1998 world cup.

It is still Eyu7 a pint, Eu5 for happy hour promotions, and most main courses come in at around Eu30.

The action in fish restaurants, and they are wonderful, can be found at the pointy end of a triangular neighbourhood: a place where fish used to be landed in open boats right up to a generation ago.

One advantage: you can survive without local currency. Even the fish and chip shop took plastic.

Eoghan Corry travelled to Iceland with Travel Department, who organise direct charters to Keflavik as part of a series of two and three day tours, including compbination holidays with Norway. www.traveldepartment.ie. 01-6371600