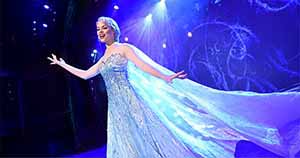 Disney cruise line will bring a musical based on the animated movie Frozen will be coming to Disney Wonder in the fall.

Frozen, A Musical Spectacular will debut on the 1,754-passenger vessel, which is also getting an early refurbishment, on cruises out of Galveston after November 10, 2016. The ship will operate Bahamas and Caribbean sailings from Galveston through January 2017, when it will move to Port Canaveral (via two short sailings to and then from San Juan) to homeport for the spring.

The show will be unique to the ship, with what Disney calls an “innovative combination of traditional theatrical techniques, modern technology and classic Disney whimsy.”

The runaway hit Frozen has been a revenue driver for Disney far beyond the film. The movie has been cited as an uptick for tourism to Norway, leading the cruise line to begin Norwegian Fjords cruises on Disney Magic in 2015, based on the movie’s success.

The film’s writers are currently working on a stage musical that is expected to open on Broadway in spring 2018.

Other attractions coming to Disney Wonder in the fall include a Marvel Super Hero Academy, It’s a Small World Nursery, Tiana’s Place restaurant, an English-style pub and the Twist n Spout waterslide. The ship goes into dry dock in Cadiz, Spain on September 9 and will emerge October 23.

Jim Urry, Vice President, Entertainment, Disney Cruise Line, said in a written statement: “this a story for absolutely everyone in the family. We are so excited to bring ‘Frozen, A Musical Spectacular’ to the stage of the Walt Disney Theatre on the Disney Wonder. The production is going to delight each one of our guests