Trending
You are at:Home»Knowledge»Henley visa survey: Ireland has 15th most valuable passport in the world, Germany the most valuable 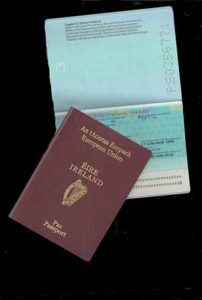 Ireland is among a group of countries that has the 15th most valuable passport in the world, according to a survey of visa restrictions by Henley & partners.

The Henley list awards points to passports which do not require visas for travel. Germans have the most valuable passports as they can who can access 177 of the 219 destiantions countries without visas. They are followed by Sweden and 16 of the most valuable 21 passports in the world are from European countries.

Syria, Somalia, Iraq, Pakistan and Afghanistan occupied the bottom places in the list, accessing 32 countries or fewer without requiring a visa.

The index is produced in cooperation with the International Air Transport Association and countries are ranked according to the total number of other countries which they can access visa-free. There are 219 destination countries (territories) in total. The maximum attainable score is 218 as points are not assigned for a national traveling to their own country. The survey evaluated 199 nationalities (passports): the 193 Member States of the United Nations, Hong Kong, Kosovo, Macao, Palestinian Territory, Taiwan and Vatican City.

E-visas are treated in the same way as visas on arrival. Where the conditions for obtaining an e-visa are straightforward (fee, return ticket, hotel reservation), a point was assigned. Where there are additional conditions such as invitation letters and consular approval, a point was not assigned

Countries that do not enforce their own visa restrictions are considered as a nationality, but not as a destination: Andorra, Liechtenstein, Monaco, Palestinian Territory, San Marino and Vatican City.

The survey does not include eight unrecognised states: Abkhazia, Northern Cyprus, South Ossetia, Nagorno-Karabakhc, the Pridnestrovian Moldavian Republic, Somaliland, Transnistia and Western Sahara, nor does it include autonomous rebel regions such as Donetsk People’s Republic, Luhansk People’s Republic, and the Islamic State of Iraq and the Levant.

The IMF has 189 members, the United Nations 193 and 2 observers, the United States recognises 195 countries, 203 countries are  recognsied by at least one sovereign state, the Olympic Movement 205 members , FIFA  211 and the IAAF 215.

Separately Ireland ranked sixth for 2015 in the Henley Quality of Nationality Index, a drop in one place from its 2014 ranking. The rankings rate 161 of the 196 world nations by looking at the strength of each country’s economy, health, education, standard of living, and level of peace and stability. It also evaluates how easy it is for citizens to travel without a visa and live and work abroad.

European countries fill the top 10 with Germany top the table, followed by Denmark, Finland, Norway, Iceland and Sweden. Ireland are tied with Austria for sixth place, with France, Switzerland, the Netherlands and Belgium rounding out the top 10. Britain just misses out on a top 10 place in 11th.

European countries fill all spots on the list down to 28th, when the USA breaks the pattern as North America’s top-ranked nation. Japan is the first Asian country listed at 30th, New Zealand heads the list for Oceania at 31, with Chile the top-ranked South American country at 34th. Africa is represented just once in the top 50, with the Indian Ocean island of Mauritius scraping in at 50.