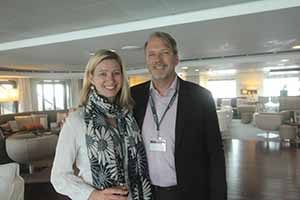 Ponant luxury cruise line invited agents on board to see their L’Aural expedition ship in Dublin this week. The ship alternates between the poles, cruising Antarctica in our winter and the North Pole in our summer. Ponant recently ordered four ships from Vard, the Norwegian subsidiary of the Italian Fincantieri group first step in the expansion of the company’s fleet since it was bought by Artemis, holding company of the Pinault family, in 2015. Picture shows Stephen Winter and Julie Giraud who hosted agents on board the ship. Watch here Stephen Winter of Ponant speaking about the French cruise line which is relatively unfamiliar to the trade in Ireland.