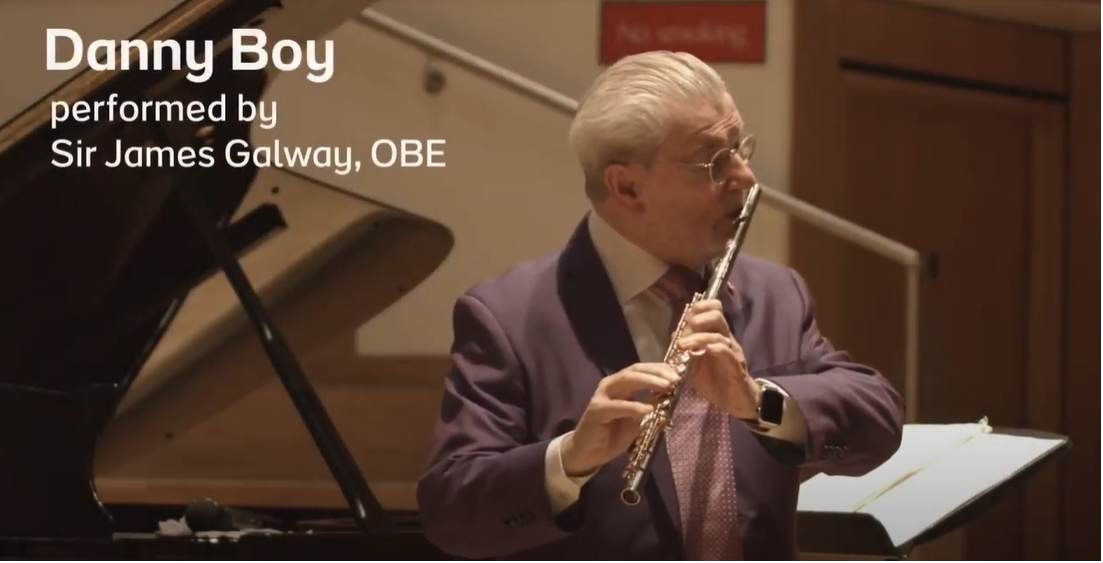 In the new video released by Tourism Ireland, Belfast-born Sir James Galway OBE, nicknamed ‘The Man with the Golden Flute’, tells viewers that Danny Boy or the Londonderry Air is the most beautiful tune he knows, which he played on the streets of Belfast, where he grew up. He invites viewers to “come and visit us one time in Northern Ireland and we will play it for you”.

During his performance, viewers will also see some of Northern Ireland’s iconic locations. These include places such as Titanic Belfast, Derry’s city walls and Peace Bridge, Mussenden Temple, the Carrick-a-Rede Rope Bridge, Glendalough, the Cliffs of Moher and the 5,000-year-old Hill of Tara.

View the video below:

Siobhan McManamy, Tourism Ireland’s Director of Markets, said, “Tourism Ireland was delighted to work with Sir James Galway to create this truly uplifting video. It will be seen by our fans and followers on social media around the world, reminding them why Northern Ireland will be such a great choice for a holiday or short break, when the time is right.

“Tourism Ireland’s aim is to ensure that the island of Ireland remains ‘front-of-mind’ among prospective visitors everywhere, until such time as they can visit again. Once this crisis is past, and the island of Ireland is open again to international visitors, we in Tourism Ireland will be ready to roll out an extensive recovery kick-start programme. We will play our part in delivering a sustainable recovery for the long-term future of our industry.”

This video is part of Tourism Ireland’s #FillYourHeartWithIreland (#FYHWI) online initiative. At a time when international visitors cannot travel here, Tourism Ireland is rolling out this #FYHWI campaign to share inspirational content about the island of Ireland with its millions of fans and followers on social media, including