Trending
You are at:Home»Aviation»Aer Lingus to announce new trans-Atlantic route on Friday

The lease on another A330 was agreed in the last fortnight and preparations are underway for a 4w long haul route..

The route is in addition to the plans for further expansion to increase trans Atlantic traffic by 55pc when between eight and twelve A321s are brought into service by the airline.

Aer Lingus recently said all of their recent trans-Atlantic route launches had been profitable from the start.

Aer LIngus Ivan beacom hinted at the announcemtn at the Travel Centres ofnerence in mullingar, saying that future destinations would be east coast centres whicha re served by partner airlines.

In the longer term, Aer LIngus A321 destinations that is exciting everyone at the airline was used to illustrate the airline’s 126-page Capital Markets Day document, an arc from Charlotte to St Paul that encloses a dozen tempting targets. 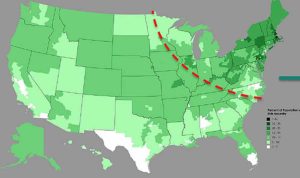 Willie Walsh told investors that Aer Lingus unit revenue on the transatlantic declined this year thanks to increased capacity and the proposition that IAG has involves them being able to continue to reduce their unit cost. “A very strong unit cost performance enables them to be even more price competitive and as Aer Lingus goes into these new transatlantic markets they are profitable from the very beginning. I see lots of airlines pursuing rapid growth at ridiculous cost. It’s not a sustainable situation and we’re not going to participate in that. We learned from our experience that while the growth figures may look impressive, the profitability figures look very [un-] impressive. I think you’ll find more and more airlines will do what we’ve done this year and will calibrate to what it is they can do within their own means.  We’re aware of airlines in the low-cost segment in Europe out there desperately looking for wet lease capacity for next year. So desperate that they’re actually asking us for capacity.”

Aer Lingus capacity has grown 22pc since the IAG takeover and Willie Walsh said that Aer Lingus could raise the number of A321LR aircraft orders from eight to 12. Rolling 12-month operating profit has improved from about €60m to almost €250m and operating margin from 4pc to 13pc.  Return on invested capital from about 8pc to about 23pc. Aer Lingus plans to capture 80-85pc of its transatlantic passengers with lowest cost direct distribution and to continue to increase North American point of sale traffic.