Trending
You are at:Home»Ireland inbound»Whiskey and Cosmetics make Dublin Airport’s shopping commended inside and out.

The Moodie Davitt Report Dreamstore Awards 2016 have voted Dublin Airport’s perfume and cosmetics store as the world’s best. The award is decided by the views of the brand owners that supply retail for airports around the world. The decision is based around subjective evaluation in areas like delivering value for the travel retail experience, showing a strong understanding of their customers, and innovation. Other winners were in Sydney Airport, Dubai Airport, Changi Airport and Hong Kong international airport.

This is the third international award in the last 18 months for the re-developed retail area in Terminal 1. ‘Candy Cloud’, the confectionary store, won Speciality Concept of the Year at the Frontier Travel Retail Award, at which Aer Rianta International also took home Best Airport Retailer (single location).

Excerpts from the report: “Even against stiff competition from the global heavyweights, one retailer at one location was a commanding number one:Aer Rianta International at Dublin Airport T1….. One leading partner in skincare said” ‘ARI are always challenging themselves to grow further, analysing who is buying and why, and adapting their concept.’ Another said ‘The store has an amazing atmosphere and they have a very client-centric approach…. travel retail’s best-in-class retailers include Aer Rianta International (ARI) at Dublin Airport (fragrances and cosmetics) and Gebr Heinemann at Sydney Airport (wine) as well as DFS (spirits) and FNA intenrational (confectionary) at Singapore Changi. The list also features Dubai Duty Free (tobaco), DFS at Hong Kong international (sunglasses) and King Power International Group at Bagkok Suvarnabhumi (fashion and accessories).”

The duty free Irish Whiskey at Dublin T1 also was commented upon favourably in the report, one supplier being quoted as saying “A superb selection from all over the world makes this an ‘Aladdin’s Cave’ for whiskey lovers. It is difficult to source such an assortment, and it’s a credit to the buying team.” 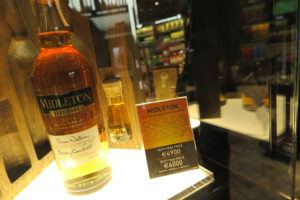 €6,000 bottle of whiskey on display at the Irish Whiskey Collection at the Loop which offers 400 whskeys from around the world, pictured at the opening event for the new Loop at Terminal 1 in Dublin Airport, March 12 2015

Jack McGowan said: “To  be chosen by brand owners as the best beauty store in such a highly competitive category is a ringing endorsement of the endeavours of the entire Dublin retail team. The T1 redevelopment project was a truly cross functional implementation with retail operations, buying, design and marketing all collaborating to deliver a world class result. This success on the back of winning Airport Retailer of the Year in 2015, further enhances our credentials as a world class retailer and I would like to  personally congratulate and thank all involved.”