Trending
You are at:Home»Aviation»Sharon Shannon’s in Shannon as 400,000 visitors expected at this year’s Fleadh Cheoil

Shannon Airport is to come on board as main sponsor for the second year running for Ireland’s largest music festival of the year, Fleadh Cheoil na hÉireann Inis 2017. 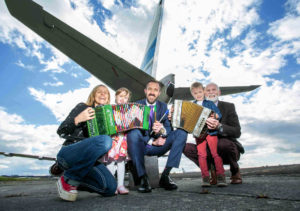 Matthew Thomas, CEO of Shannon Group, which operates the airport, said:  “The Fleadh was a huge success last year and showed just why Clare is considered by many to be the home of traditional Irish music. We were incredibly proud to be associated with the Fleadh last year. The atmosphere around the town of Ennis was electric, the sense of hospitality was incredible and at the end of it all Ennis and Co Clare got a huge economic injection.”

Musician Sharon Shannon, who attended the sponsorship announcement, will be performing in the ‘Shannon Aerodrome’ at the Fleadh in Ennis on Saturday night, August 19. She said: “There was an incredible buzz all over the world last year about the Fleadh in Ennis. People are already gearing up for another amazing treat of nine days and nights of music, dancing, singing and craic at the Fleadh here in Ennis once again. I’m really looking forward to it.”

Frank Whelan, Chairman of the Fleadh Executive Committee, said the backing of groups like Shannon Airport is vital: “Sponsorship is the life-blood of an event of this scale. It would be impossible for us to host an All-Ireland to the standards we aspire to without it and we are deeply indebted to Shannon Group for such a strong vote of confidence in Comhaltas as a cultural organisation, in ourselves as the Fleadh Organising Committee and in the town of Ennis and Co Clare.”