Trending
You are at:Home»Aviation»7,800 applied for 18 trainee pilot places with Aer Lingus

The airline said that “competition was extremely high for the limited number of positions, with 7,800 people applying”.

Candidates will now undergo pilot training in Jerez, Spain, for the next 13 months, before returning to Dublin and applying their new skills to Aer Lingus’ A320 Airbus aircraft. The Future Pilot Programme is anticipated to continue in the coming years, as the airline grows and adds new routes. 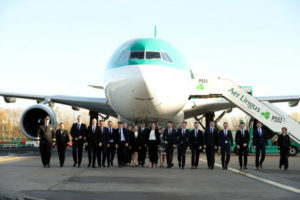 The future pilots will end up flying modern Airbus A320/1 and Airbus A330 to more than 100 destinations across Britain, Europe and North America.

Currently, 10pc of the airline’s pilots are women, which is more than twice the international airline industry average. Aer Lingus was the first airline in Europe to employ a female pilot, when Grainne Cronin flew her first flight as a qualified pilot in 1978.

In 2017, the airline operated a flight from Dublin to London with an all-female team, in celebration of International Women’s Day. Flight EI162 was piloted by Captain Louise Gilroy and First Officer Amy Cunningham, with women providing all the support roles on the ground and in the air.

This year, flight EI105 from Dublin to New York was managed by an all-female crew. Overall, more than 2,000 of its 4,200 employees are female, in areas including cabin crew, engineers, flight dispatchers, check-in and boarding agents, planners, IT, marketing, communications, finance, and logistics specialists.