Aer Lingus CEO Stephen Kavanagh said the development of Dublin as a hub should be funded through passenger charges.

A study by EY, commissioned by the airline, said that €6bn would flow to the Exchequer over the next 15 years, through passenger spending and the creation of 33,950 jobs, 26,990 of them in tourism. The EY report reckons that 1,147 jobs would also be created during the construction phase.

The report said Dublin already has a number of advantages, including the fact that network carriers are already operating at the airport; it has a large route network; Ireland has a geographical advantage in the transatlantic market; and US Pre-Clearance is “a significant advantage”. 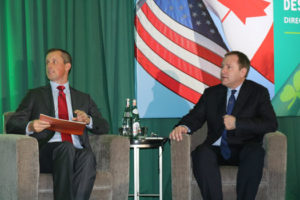 Dublin Airport is currently experiencing 6pc growth in passenger numbers year on year.  The report is based on the development of Dublin as a hub bringing an additional 5m passengers by 2033

Aer Lingus CEO Stephen Kavanagh said: “Dublin Airport has a number of the characteristics of a successful hub, but new infrastructure is needed to fully realise the potential.  We have had constructive engagement with the DAA and we understand they are likely to propose hub infrastructure development within the Capital Investment Programme for the next regulatory period 2020-2024.  We welcome this development.. The opportunity [for Dublin as a hub]will be forgone unless we can invest and build in a timely manner.”