Cork Airport has launched its 2019 Summer schedule with eight new routes. It is offering 52 routes this year.

Aer Lingus starts two new 2w routes this summer, to Dubrovnik from May 4 to September 28 on Tuesdays and Saturdays; its Nice service will run April 17 to October 23 on Sundays and Wednesdays. This will also be the first summer season for Aer Lingus’ new year-round Cork to Lisbon route, which commenced last October. It operates on Mondays and Fridays. 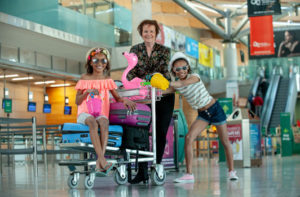 Sisters Rebecca (11) and Jessica (9) Akinkuolie with Kathleen Walshe from Cork Airport Communications Department, at the launch of Cork’s Summer schedule

Ryanair has five new routes this summer, with Naples from June 2 until August 28 on Sundays and Wednesdays along with a 2w year-round routes to Poznań (from April 2), Budapest (from April 7) and Malta (from April 4). Ryanair’s service between Cork and Luton Airport, launched last October, will run daily throughout the summer schedule. In total, Ryanair has added an extra 45,000 seats to summer routes.

Cork Airport Managing Director Niall MacCarthy said: “The new routes are among the top requested destinations from our passengers. Their addition to Cork Airport’s 2019 Summer Schedule gives holidaymakers choosing to fly from the south of Ireland even greater destination choice.”

Further destinations in Cork Airport’s 2019 Summer Schedule include a 3w service to Boston Providence with Norwegian; Bordeaux and Carcassonne (Ryanair); Paris (Aer Lingus and Air France) and Rennes (Aer Lingus). Milan-Bergamo is served by Ryanair; and Verona by Volotea.