Trending
You are at:Home»Aviation»SECOND Boeing 737-Max loss in 6 months: Ethiopian ET-AVJ crashes after take off from Addis to Nairobi

A second Boeing 737-Max incident in six months has created shock waves through the aviation industry.

Ethiopian Airlines ET-AVJ , flight ET302,  crashed near the town of Bishoftu, 62 kilometres southeast of the capital Addis Ababa, a few minutes after take off out of Addis en route to Nairobi.

The victims included Michael Ryan from Lahinch. The victims of the Ethiopian Airlines flight came from at least 32 countries. The largest number were from Kenya. Among the dead were 22 UN staff, many heading for an assembly of the UN Environment Programme in Nairobi. 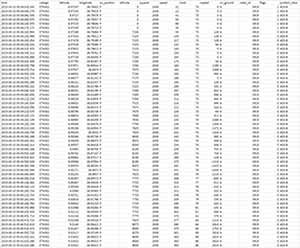 The aircraft took off at 8:38 am (6.38am Irish time) from Bole International Airport and “lost contact” six minutes later.

This is the second incident involving a Boeing 737-Max.  Lion Air Flight 610 crashed into the Java Sea, also early in its climb, 13 minutes after take off from Jakarta on October 29, 2018,  All 189 onboard died. It too was brand new, having been delivered to in August 2018. Following the Lion Air accident, Boeing issued an operational manual guidance, advising airlines how to address erroneous cockpit readings.

Lawsuits in the Lion Air crash have concentrated on claims raised by pilot unions which accused Boeing of including a new autopilot update in the 737 MAX8 without informing them.

Ethiopian Airlines has flown between Dublin and Addis Ababa since June 2015.

The airline is regarded as Africa’s leading carrier, with a well-run and profitable network and an excellent safety record.

Ethiopian Airlines’ maintenance standards are outstanding. It uses the most technologically advanced aircraft in the world, the Airbus A350 leased out of Dublin, and operates the 787 Dreamliner on the link between Heathrow and Addis Ababa. 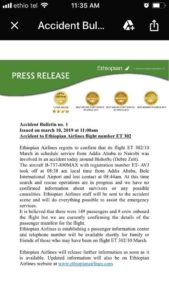 A written statement from Ethiopian Airlines says: Ethiopian Airlines regrets to confirm that its flight ET 302/10 March in schedule service from Addis Ababa to Nairobi was involved in an accident today around Bishoftu (Debre Zeit).
The aircraft B-737-800MAX with registration number ET- AVJ took off at 08:38 am local time from Addis Ababa, Bole International Airport and lost contact at 08:44am. At this time search and rescue operations are in progress and we have no confirmed information about survivors or any possible causalities. Ethiopian Airlines staff will be sent to the accident scene and will do everything possible to assist the emergency services.
It is believed that there were 149 passengers and 8 crew onboard the flight but we are currently confirming the details of the passenger manifest for the flight.
Ethiopian Airlines is establishing a passenger information center and telephone number will be available shortly for family or friends of those who may have been on flight ET 302/10 March.