Trending
You are at:Home»Travelextras»FEATURE: An exploration of mainland Greece 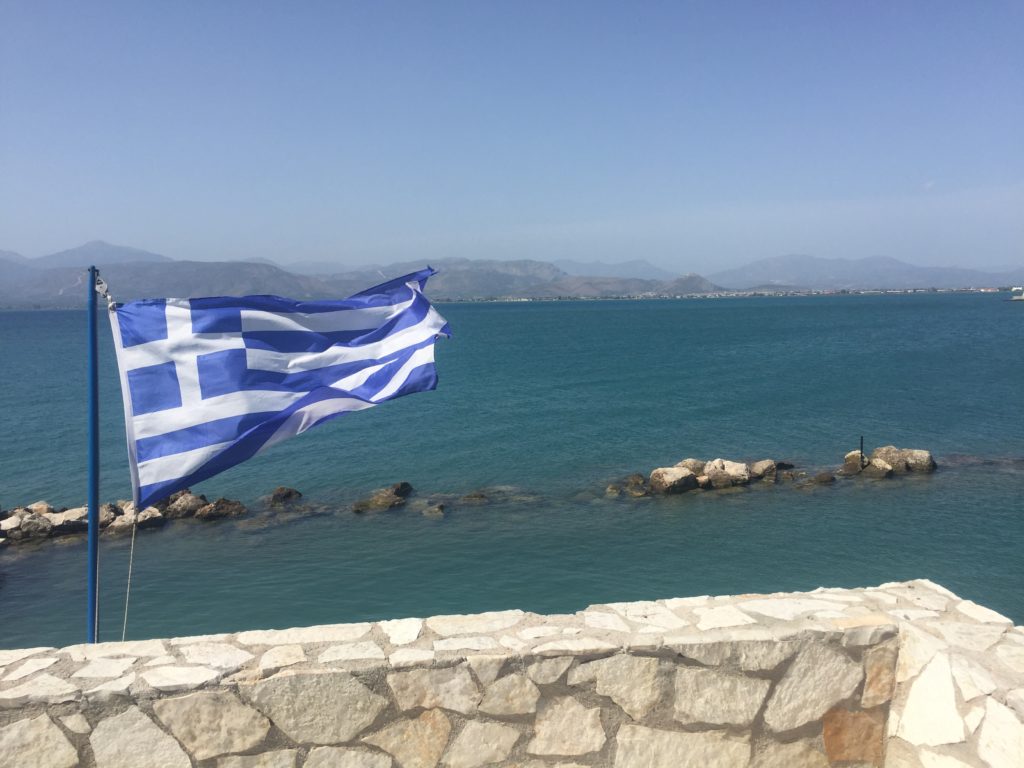 Greece is a country that’s been in the media for all the wrong reasons over the last number of years. EU/IMF bailouts totalling over €250b and an influx of Syrian refugees have been the stories that have dominated the headlines relating to this once world-leading nation.

I spoke to several Greeks over the course of a week there this September and heard first-hand the stories of blocked bank accounts, spiralling taxation and the increasing difficulty to find work. And the decay is evident on the streets: abandoned buildings, widespread graffiti and drug and crime problems in the former crossroads of the world, Omonia Square, are all visible.

But, the things that made this fascinating country an amazing destination are all still there.

Athens: the Acropolis, Plaka and Monastiraki

I arrived into the city in the evening with Aer Lingus and having made my way to the three-star Hotel Solomou in Omonia, and having seen the urban dilapidation first hand, I was wary of a city that I had heard so much about but never visited.

However, when one claps eyes on the Acropolis, the ancient citadel that sits proudly up above the rest of the sprawling city and its 4m population, the negatives of the city melt away. It’s a stunning sight, lit by flood lights and surrounded by olive groves, as the hills gently mount to the architectural gem. 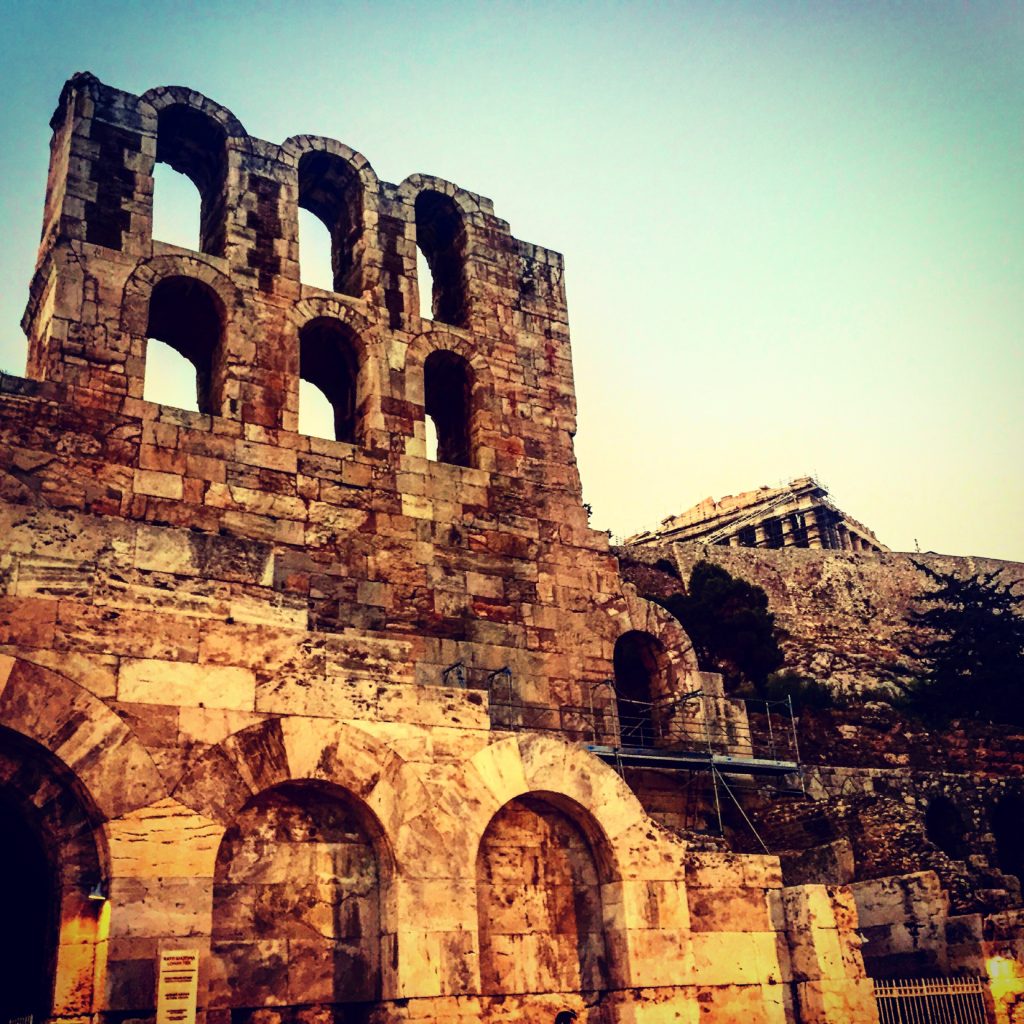 Equally impressive are the neighbouring areas. Plaka surrounds the eastern side of the Acropolis and is a network of labyrthine streets full of upper-class homes and street vendors selling dried fruits and nuts to the throngs of tourists. A stroll along these beautiful streets, in balmy 30 degree Greek autumn weather, is almost the perfect travelling experience.

You don’t have to do much in the presence of the Acropolis to be content, it’s presence ensures that alone. Just strolling, admiring its beauty from all angles, is enough.

On the northern side of the monument, Monastiraki is the surrounding area. A different beast altogether to Plaka, it has a bustling square, metro station and flea market, which play host to a bric-a-brac of Mediterranean goods on sale. Encircling this centre are boutiques, bars and restaurants. And one of those bars is possibly the best place in the city to view the Acropolis. A for Athens, directly opposite the Monastiraki Metro Station exit, is an upmarket hotel, which features a roof-top bar that boasts stunning views out over the city, with the Acropolis at its centre. When getting out of the elevator at the top the sight greet you, stuns you. There you can plonk yourself down, order some Greek wine or craft beer and spend an hour or two chatting to locals and tourists, before paying what is a hefty bill it must be said and heading on your way. 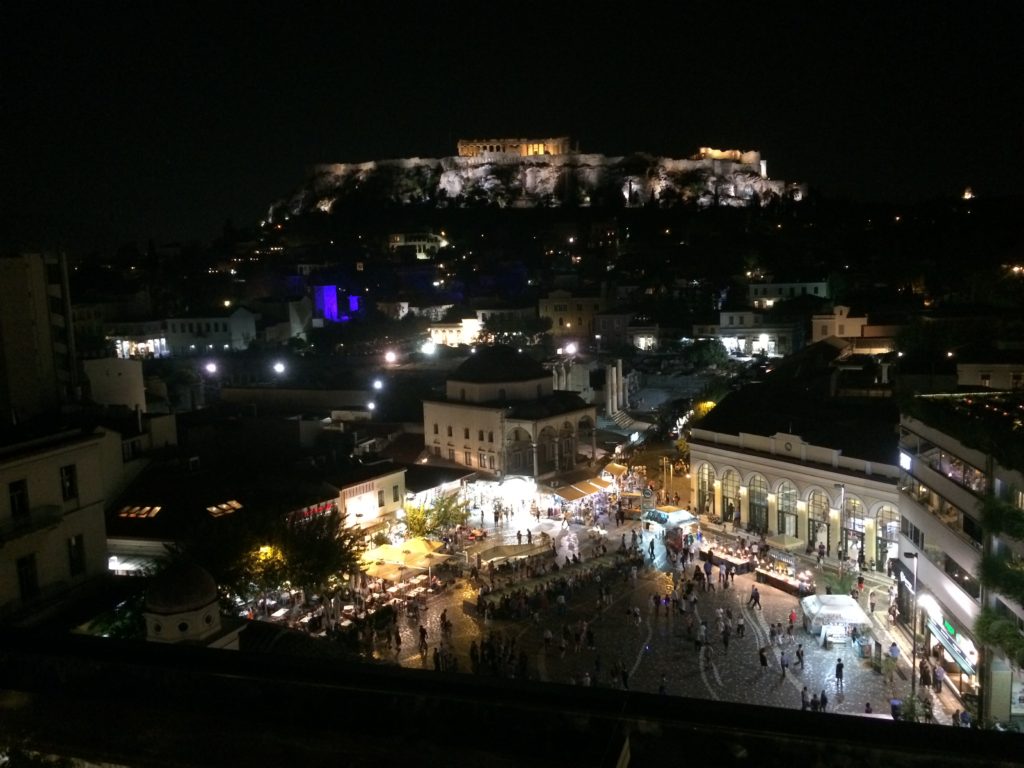 The view from A for Athens

Alongside the Acropolis, one of the most defining images of Athens is the kebab or souvlaki. And after an evening of walking the dusty streets you deserve one. There are many souvlaki joints lining the streets of Monastiraki but one stands out from the crowd – Thanasis. Also located just on the main square, it looks like your average tourist trap on the outside: paper tablecloths etc. But it’s famous for its minced lamb, tomato, onion, parsley and yoghurt kebabs and does not fail to deliver. As something of a kebab connaisseur I can say this one of the best I’ve ever tried worldwide.

If you have time for a nightcap, stroll down the road to Club Neon. It sounds like a rave bar but is in fact quite the opposite, a little Greek bar, with old-style Mediterranean chairs and tables outside on the pavement hosting chats and debates, with an inside decorated with antique furniture and odds and ends. It’s one not to miss. 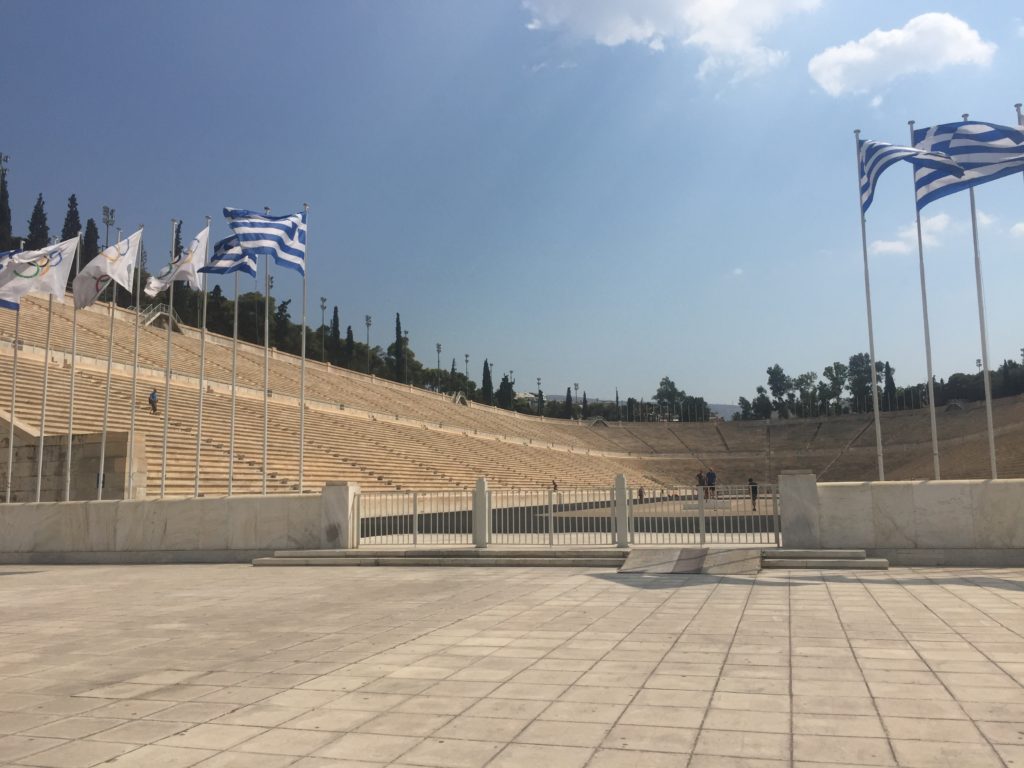 You can absorb Athens’ core in a day, two is better, in order to also take in Syntagma Square, the House of Parliament and the home of the modern Olympics – the Panathenaic Stadium, but other treasures await further south on the Peloponnese peninsula and its hard not to tear yourself away from Athens as soon as possible in order to see them

Car hire is easy in Athens with lots of travel agencies around Syntagma and Omonia Square offering good deals if you haven’t booked online. And two hours of driving south from central Greece where Athens is located will take you to the old capital of Nafplio; en route you can also stop off at the city of Corinth, famous for its ancient ruins but also boasting a lovely town centre lined with restaurants.

The drive south is dominated by mountains and is spectacular as you get to fully appreciate how undulating this country really is.

And as lovely as Corinth is, Naflplio is where it’s at. It was initially held by the De La Roche, before becoming a Venetian city, and then part of the Ottoman Empire, before becoming the capital of the Hellenic Empire from 1821 to 1834. But as one one local told me, “It was a good thing it lost its title as capital, as the city remained small and largely unspoilt,” – rather then becoming a behemoth.

Driving into the outskirts it’s fairly nondescript but at its heart in the old city it’s stunning, with small old streets connecting a series of squares with tavernas and shops down little alleways with bougainvillea hanging down from trellises. 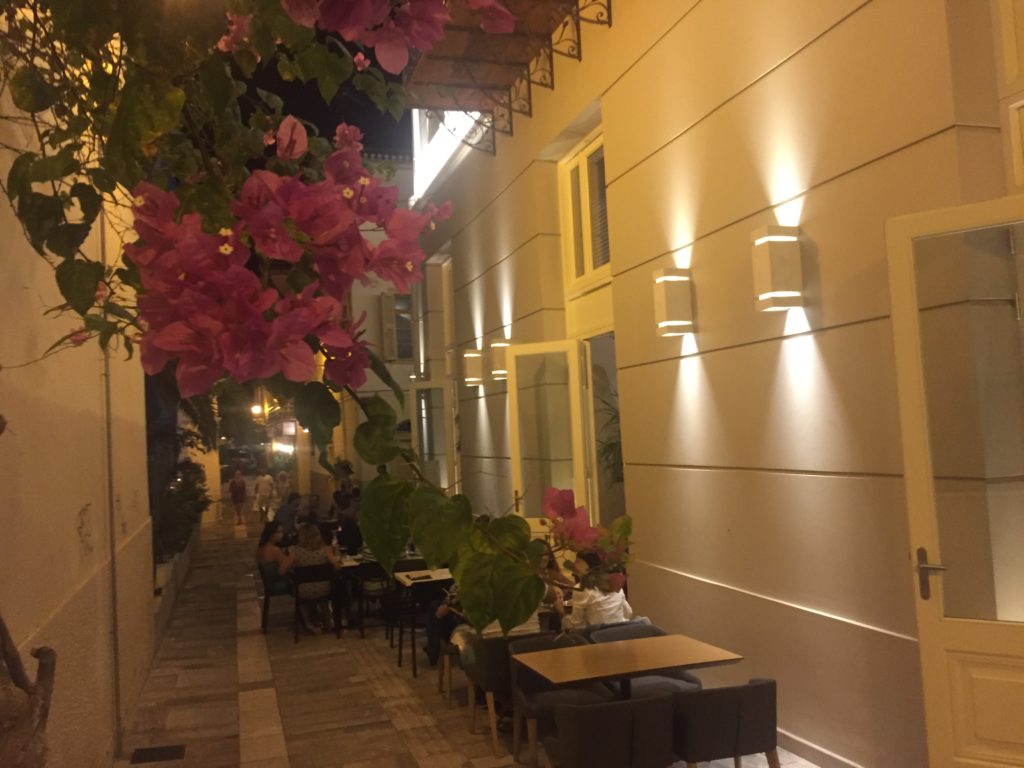 A sidestreet in Nafplio

I was booked into the four-start Hotel Agamemnon with its perfect location right on the port looking out over the Mediterranean. A waterside view gave me the perfect vantage point every morning to look out over the sea dotted by yachts and with the water castle Bourtzi dead ahead. It’s simply a stunning location for a hotel, and with a superb Greek breakfast included in the €60 nightly fee for a double room, it made for incredible value. 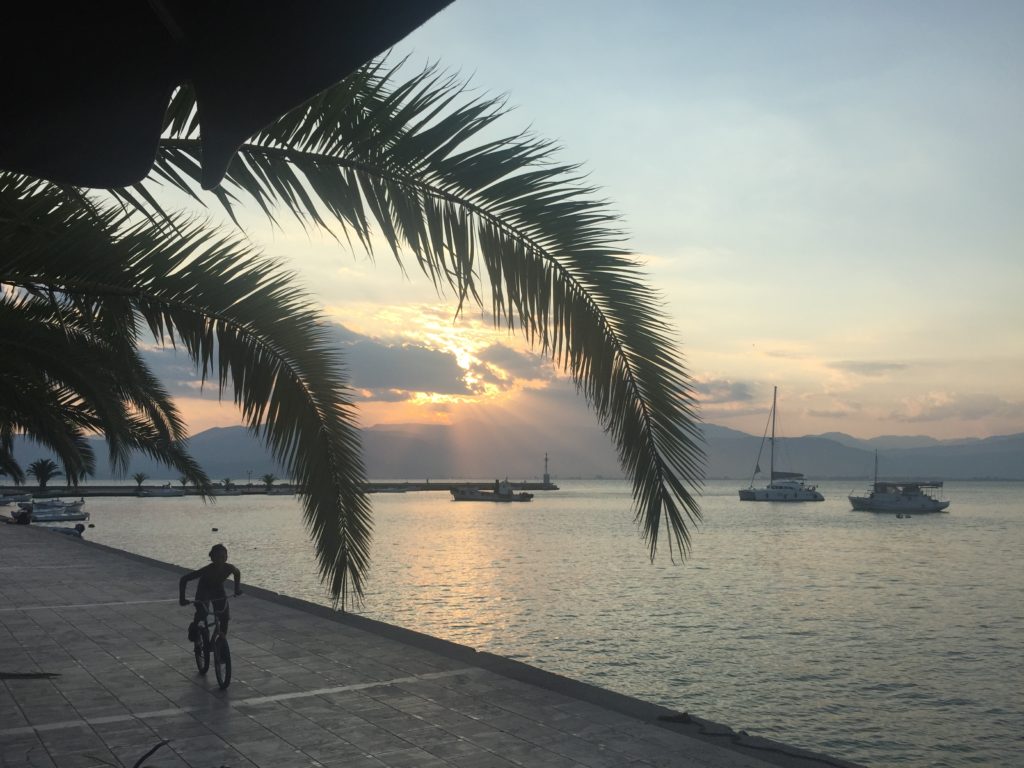 The view from Hotel Agamemnon, Nafplio

From the hotel, a five-minute stroll along the coast brings you to two sea swimming pools lined by a number of restaurants built with outdoor terraces facing onto the water. You can take a dip and then dry off and sit back with a Mythos beer before ordering lunch or dinner. 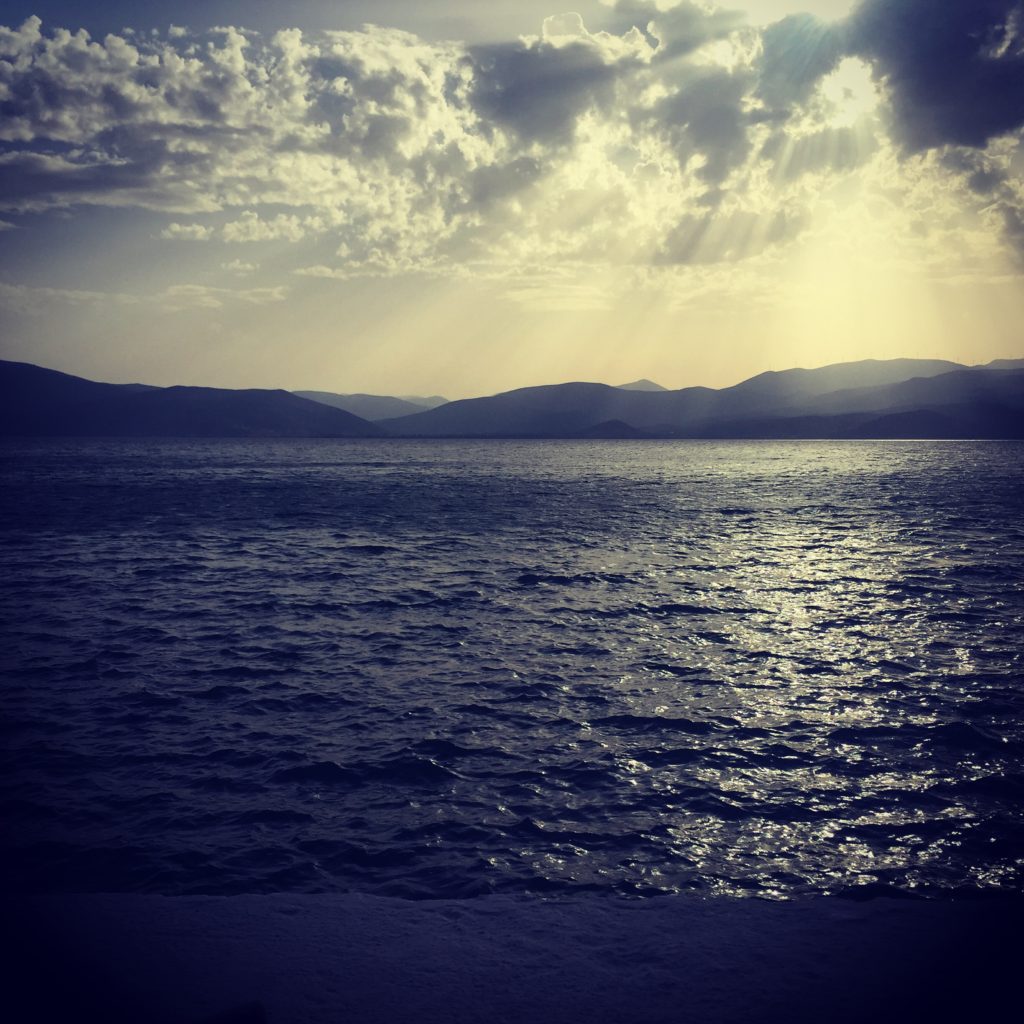 Another kilometer walk down the coastal path, which is stunning in itself, and boasts mesmerising views out across the Med, brings you to Arvanitia Beach. A stone beach with water so clear you can see through it, one beach bar with loungers accompanied by an abandoned hotel is all that surrounds the waters. It’s the ideal place to spend a day, dipping into the water, and relaxing. You can also walk on another couple of kilometers to Karathona, a sand beach, but if you can handle the stones on Arvanitia, then it’s hard to beat. 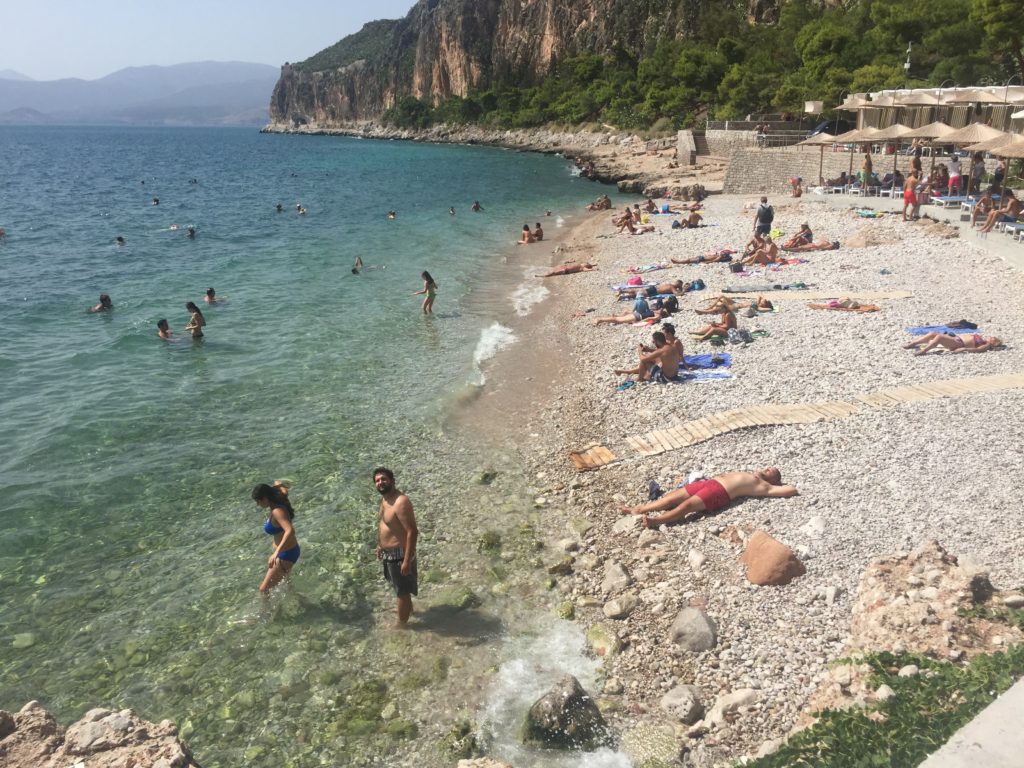 The next town down the coast from Nafplio is Tolo, which a number of years ago was a tiny little village. In recent years it’s developed into a hub of tourism with a large selection of hotels and restaurants, but the beach remains divine. All the hotels back right onto the beach, with loungers literally placed on the edge of the lapping water and table service brought down to you. 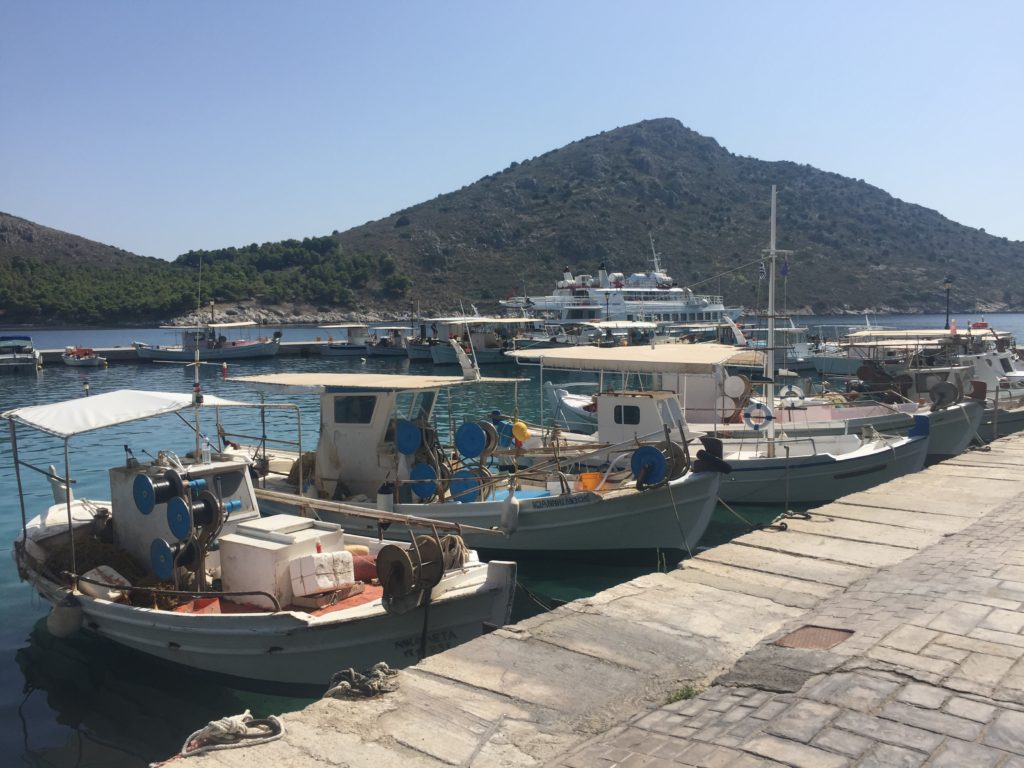 It also boasts watersports and in-water volleyball nets should you feel inclined for a little exercise.

Back in Nafplio, the old town comes alive alive at night, from having a sleepy feel during the day, as the locals and tourists mix and socialise in a range of bars and restaurants. The gourmet choice is 3Sixty Hotel and Restaurant, that serves international cuisine and a fine choice of local wines.

Alaloum, on the town’s main square, does Greek style food with tourist frills, including excellent seafood and veal.

But the best restaurant in town is Ta Fanaria (The Lanterns) on Staikopoulou Street. There since 1980 it’s the oldest eatery in town and owned and run by the chef Konstantinos Houdalas. He eats there himself during the day before the lunch and dinner rushes and is a quiet, unassuming man, proud of his business and product. He’s keen to chat and tell you how he loves to provide his guests with local Greek food served in the traditional style of the region. Its location is also stunning: a little alleyway with wooden tables and bleached white walls surrounding it. The rabbit stew, okra and grilled aubergine are simply elegance personified. 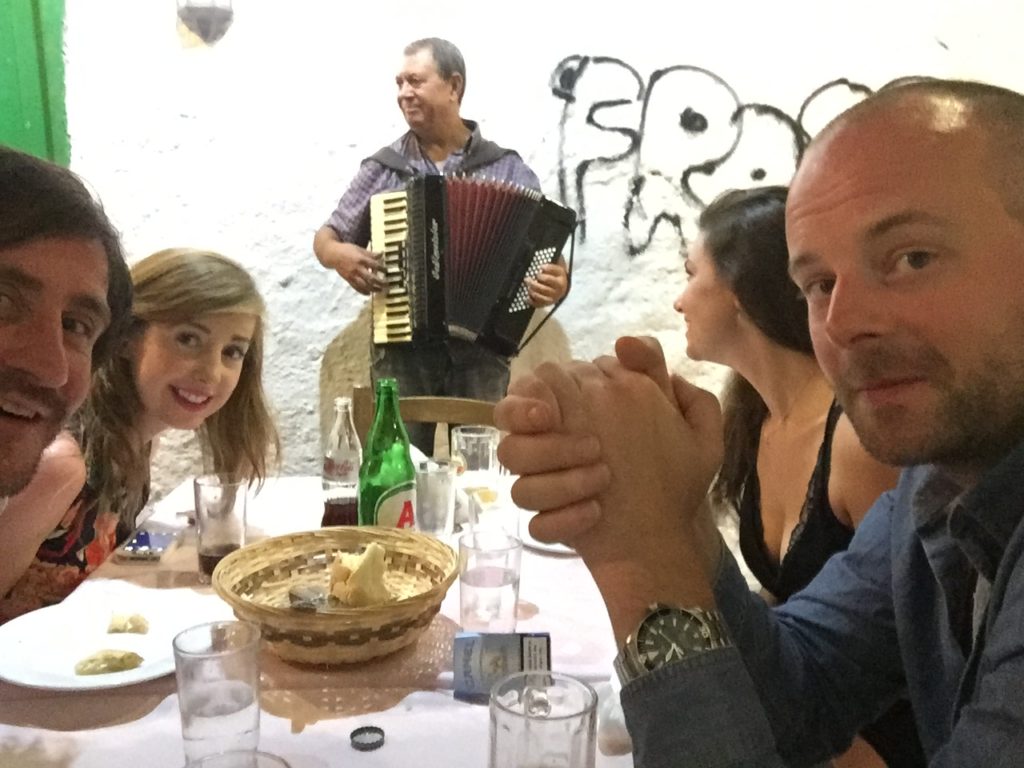 A meal at Ta Fanaria, eating in the evening warmth, washing down every mouthful with local red wine is my quintessential Nafplio experience and one that I will do again. It is one of those world eateries – and indeed destinations – that I will certainly go back to.

The Greek islands take all the plaudits but a week in Athens and Nafplio is a more off-the-beat-and-track traveller’s dream; culture, food, wine and natural beauty all wrapped into one.