With echoes of 2013’s The Gathering, which encourage the Irish diaspora to return home for a holiday, Ireland is to target the diaspora again with the launch of the Global Irish Festival Series.
The new festival series will provide funding and support, through the relevant local authorities, to local and community event organisers for events which tap into international diaspora networks to increase overseas visitors.
The Global Irish Festival Series will be piloted along the Wild Atlantic Way in Limerick and Donegal this October, with €210,000 in funding from the Department of Foreign Affairs and Trade granted for the four festivals and events in these areas. 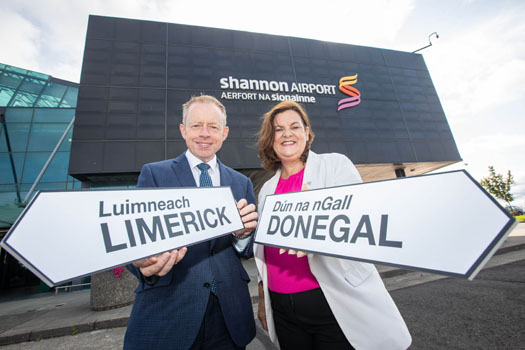 The Minister of State for the Diaspora and International Development, Ciaran Cannon, announced the launch of the new Festival Series, a joint initiative between the Department of Foreign Affairs and Trade and Fáilte Ireland, which aims to encourage our diaspora to return home to visit Ireland.
“We are delighted to announce the new Global Irish Festival Series, an initiative which will enable local communities to further build upon diaspora networks, deepening connections around the world and encouraging those abroad to return home. By improving engagement with the diaspora through new channels, we hope they will feel affirmed and valued as a part of the global Irish diaspora, and in particular, connected to the county of their heritage,” the Minster said.
In Limerick, the Global Irish Festival Series is supporting the I.NY festival which shows the historical links between Ireland and New York, and runs from October 7 to 14, and the Richard Harris International Film Festival which takes place from October 25 to 29, marking the life and works of Limerick’s most famous actor.
In Donegal, the initiative is supporting a Genealogy and Traditional Music Weekend (October 20-21), remembering our ancestors who travelled to Scotland to work and an Inter-generational Sporting Weekend which takes place from October 27-28, celebrating Donegal’s connection with football.
The Minister of State for Tourism and Sport, Brendan Griffin, said: “The Global Irish Festival Series is the perfect way to attract overseas visitors and support local communities and we look forward to welcoming our diaspora home to enjoy these great festivals and events this autumn.”
Fáilte Ireland’s Head of Festivals, Ciara Sugrue, said that “As these events take place in the ‘shoulder seasons’ each side of summer, they will also help tourism operators to trade for longer”.
The Global Irish Festival Series is also being launched in the US this September at the Consulate General of Ireland in New York in partnership with Tourism Ireland. See www.wildatlanticway.com/globalirish