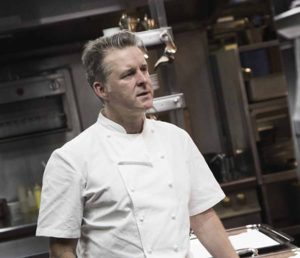 Ireland now has 12 Michelin Star restaurants as Heron and Gray were added to the list for 2016 compiled by the international peer-review guide.

It is a record number since Ireland was first included in the Michelin ratings system in 1974.

Heron & Grey on 19A Main Street Blackrock is co-owned by head chef Damien Grey, originally from Goulbourn Australia, and Andrew Heron. With only 18 seats, serving lunch on request for large private parties and dinner in two collective seatings, they have certainly overcome the difficulties of their ‘little’ kitchen.

Ireland’s only two star restaurant is Patrick Guilbaud, originally in James’s Place East and then in the Merrion Hotel in Dublin. Patrick is Ireland’s longest holder of a star having held a single star (1990-5) and two stars since 1996.

They join Martijn Kajuiter’s Cliff House in Ardmore, Michael Deane’s Eipic and Stephen Toma’s Oxx in Belfast (both since 2016), Restaurant Patrick Guilbaud in the Merrion Hotel (one star 1990-5, two Michelin stars since 1996), Ross Lewis’s Chapter One (since 2007), Derry and Sally Clarke’s L’Ecrivain (since 2003), Mickael Viljanen’s The Greenhouse in Dublin (since 2016), Ultan Cooke’s Aniar (since 2013) and Enda McEvoy’s Loam (since 2016) in Galway (Enda was previously chef with Aniar), Gareth Byrne’s Campagne (since 2014) and Cormac Rowe’s Lady Helen in Kilkenny (since 2014). Oliver Dunne’s Bon Appétit in Malahide and Kevin Thornton’s at the Fitzwilliam Hotel lost their Michelin Star status in 2015 having closed their upstairs restaurant and renovated their brasserie, Oliver Dunne counted the loss as a blessing. Oliver Dunne: “We got our star and the Celtic Tiger kicked in and everyone pretended to be a bit foodie and talked about Michelin stars but nobody really understood them.”