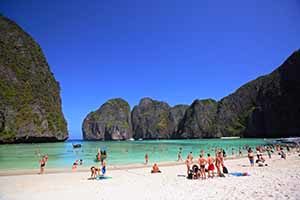 Maya Bay on Phi Phi island, the beach made famous by the Leonardo DiCaprio film, has officially been closed indefinitely to recover from the influx of tourists.

After an initial four month closure earlier this year  the famous beach on Phi Phi Leh island in the Andaman Sea may face closure for more than two years as it is no longer able to cope with the 6,000 plus visitors per day descending on its shore since The Beach was released in 2000.

The initial closure on 1 June aimed to salvage the area’s coral reefs which have been damaged by warmer temperatures and the flood of tourists travelling by speedboat from the nearby islands of PhiPhi and Phuket and Krabi on the mainland. But it has now been closed indefinitely.

While tourism makes up about 12pc of Thailand’s economy there has been increasing concern about the country’s ability to manage its rapidly growing number of visitors. 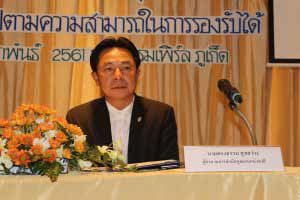 Songtham Sukswang,the director of the Office of National Parks said: “Four months’ closure was not enough. We need at least a year or even up to two years or maybe more for the environment to recover – this includes the coral reefs, mangrove, and the beach.”