Aer Lingus is back recruiting – and it’s looking to attract women in particular into its  annual Aircraft Maintenance & Engineering Apprentice Scheme.

The airline is offering 20 placements – double that of last year – and said there is a particular emphasis this year in attracting female applicants. Last year three of the ten successful applicants were female.

Aer Lingus has hired 46 apprentices since the scheme launched in 2011. It said this year’s larger intake is needed to meet the demand for increased long and short haul flights. 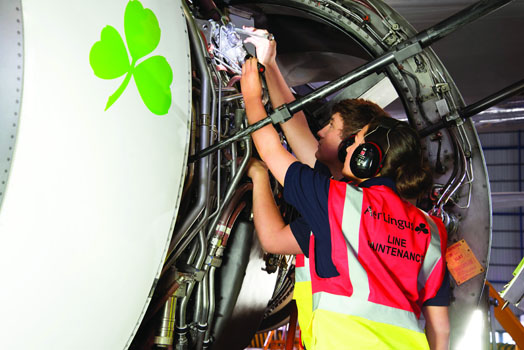 Aer Lingus targets women in particular as it launches its 2018 Aircraft Apprentice Scheme, May 29, 2018

The four-year programme is run in conjunction with SOLAS, based in Shannon and with DIT in Dublin. Apprentices will be working primarily on line maintenance and will be focused on delivery of Aer Lingus’ guest experience.

Applicants need to be 18 by September 1 next with a minimum level of Junior Certificate – but the airline said it also keen to hear from applicants with Leaving Certificates or degrees. It said applicants “will need to be motivated and enthusiastic, be technically minded, have very good communication skills and work well in teams.

“Applicants should be dedicated to the programme and to a future career with Aer Lingus as at the end of the scheme the aim is for apprentices to be fully qualified aircraft engineers and continue to work at Aer Lingus.”

Aer Lingus Chief Technical Officer, and former apprentice, Fergus Wilson said: “Following on from our recent Future Pilot recruitment announcement and substantial growth at the airline, with introduction of new aircraft and new routes to Seattle and Philadelphia this year, we are delighted to be able to provide this apprentice scheme again.”

The application process can be found at http://careers.aerlingus.com. The closing date for applications is Wednesday, June 6.