Ryanair carried an extra million passengers in September, maintaining the growth of 8pc from August and slightly below the growth of 9pc recorded in July.

Growth figures to June were skewed by the fact that Lauda had been acquired by the group less than twelve months previously, but growth for the Ryanair brand was also 8pc.

Growth figures for the previous four Septembers had all been in double digits, 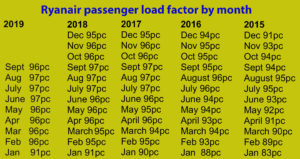 Load factor of 96pc is still among the industry’s highest, but down from then 97pc recorded in the previous two Septembers and in July and August for three years in a row.

Ryanair’s rolling annual of 150.3m puts it ahead of Lufthansa in the race to become Europe’s largest airline. Ryanair is the sixth airline to carry more than 150m passengers in a year.