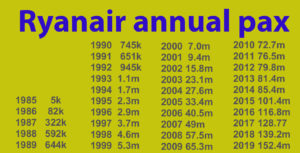 Ryanair group carried 152.4m passengers in 2019, up 9pc to become the largest airline in Europe.