Trending
You are at:Home»Aviation»Shannon and Cork put their cases forward to win global airport award

With just weeks to go before 300 airline representative and 3,000 delegates in total head to Guangzhou in China for this year’s World Routes conference, airports are vying for the event’s best marketing prizes.
Two Irish airports – Cork and Shannon – are nominated again this year in the best airport ‘Under 4 Million Passengers’ category, pitted against Billund, London Southend and Myrtle Beach.
Andrew Murphy, MD, Shannon Airport, told organisers anna.aero:  “The nomination of Shannon Airport for the World Routes Marketing Award is great recognition for us from the airline community we seek to engage with, and once again we are very humbled to be shortlisted.
“As an airport on the West Coast of Ireland and Europe, we have always had to work hard to generate new traffic and develop relationships with airlines. This is why Routes has been so vital to our success over the years, with the awards nomination being a wonderful bonus, on top of the great networking opportunities the events afford us,” he said. 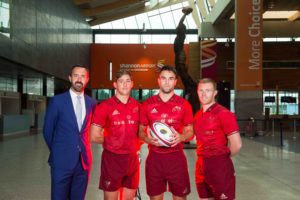 On this year’s performance, he said the airport will handle close to “1.85m passengers – a 6pc increase on 2017 and an increase of 33pc since gaining independence five years ago. In this period we have added 26 new routes, 15 route frequency increases and six new airlines. The outlook for 2019 is also very positive with the addition of new services across all sectors primarily on the North Atlantic and Europe.”
Niall MacCarthy, MD, Cork Airport, said: “We are incredibly honoured as Ireland’s newest transatlantic airport to have been nominated for this accolade by our airline partners, who we work with extensively to ensure we achieve real business results at Cork Airport.
“There is a fantastic team working at Cork Airport on our marketing initiatives and we are very focused on gaining new routes along with supporting and maintaining our existing ones. In the past 12 months, we are delighted to have secured a number of new services, including Air France’s new daily route from Cork to Paris CDG and Aer Lingus’ new year-round service to Lisbon Airport, commencing 26 October. Ryanair has also extended its twice-weekly service from Cork to Faro into the winter season.”
He added that the airport will be using the China event to grow routes, adding: “Attending the global meeting in Guangzhou will be an excellent opportunity for our team to also meet and plan with prospective airlines for the year ahead.”
The following two tabs change content below.