Trending
You are at:Home»Travelextras»Shannon publicises its new Air Canada route at Toronto event

Shannon Airport’s Declan Power joined Tourism Ireland in Canada to publicise the airline’s new transatlantic route, which starts in June.
Air Canada’s new, direct flight from Toronto to Shannon was promoted at the event in downtown Toronto. The event, organised by Tourism Ireland, was attended by HE Jim Kelly, Ambassador of Ireland to Canada, around 100 leading Canadian travel journalists and travel agents; as well as senior representatives from the airline.
The service will fly on Mondays, Wednesdays, Fridays and Saturdays until mid-October using a Boeing 737 MAX 8 aircraft.
Air Canada previously pulled a Toronto route it shared with Dublin in 2007. 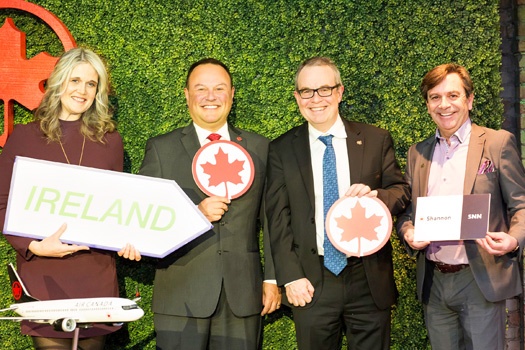 Dana Welch, Tourism Ireland’s Manager Canada, said: “It’s good news for tourism to the West of Ireland – providing Canadian holidaymakers with easier than ever access to the Wild Atlantic Way. 2017 was the best year ever for Irish tourism from Canada – with visitor numbers increasing by around 12pc over 2016.
“We look forward to working closely with Air Canada and Shannon Airport, to maximise the promotion of this new flight and maintain the strong growth momentum.”
The following two tabs change content below.