Trending
You are at:Home»Aviation»Singapore eyes service to Dublin as it takes delivery of first A350-900ULR 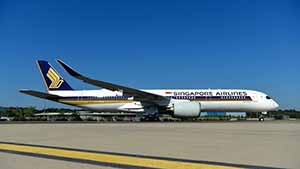 Singapore Airlines has taken delivery of the first of seven Airbus A350-900ULR aircraft it has on order and will use it to relaunch non-stop flights between Singapore and New York Newark on October 11.

The aircraft, which has business and premium economy seats only, will operate Singapore Airlines’ non-stop flights to Los Angeles starting in November. Singapore will also use the ULR to san Francisco.

Singapore Airlines is the launch customer for the ULR (ultra-long range), an extended-range variant of Airbus’s current A350-900 model with a range of 9,700 nautical miles and 20 hours of flying.

It has 161 seats, 67 in business class and 94 in premium economy similar to the current A350-900 business and economy configuration.

There are 21 A350-900s already in its fleet and 39 more on order, opening up the possibility of a Dublin service first discussed when Joe Hogan was country manager for Singapore in Ireland in 2000.

The A350-900ULR Newark service will reclaim the longest air route in the world for Singapore, from Qantas London-Perth service.