Trending
You are at:Home»Travelextras»Times changes as Ireland’s famous alcohol-free hotel of years past launches MET bar

Cork’s Metropole Hotel was legendary for decades as Ireland’s best-known alcohol-free hotel. The hotel, which opened in 1897, was run for decades by the Musgrave family, who believed that alcohol had no place in a hotel, and advertised the Cork City establishment as “Ireland’s Finest Unlicensed Hotel”.

Local barmen were, however, allowed to serve alcohol, subject to a corkage fee by the hotel – for events such as weddings. However, the ban, which was costing the hotel in lost revenue, was ended in 1956 with its first licence. 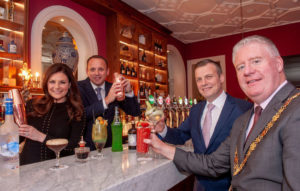 Sixty years on and the hotel, which is now owned by Trigon Hotel Group, has launched The MET – the hotel’s new bar, restaurant and tea room. It is the latest part of a €2.5m refurbishment this year which also included the refurbishment of all 108 bedrooms. Five new jobs have been created as a result of the investment.

This launch comes as the hotel is gearing up for the annual Cork Jazz Festival. Now in its 41st year, the festival was the brainchild of former Deputy General Manager Jim Mountjoy.

Aaron Mansworth, Group General Manager at Trigon Hotels said: “We are seeing very strong visitor numbers to Cork and we had a good summer across our three hotels. There is a real ‘Cork feel’ to the new menus at the MET with a number of signature dishes included on the menus.”

Roger Russell, General Manager at The Metropole Hotel said: “The Metropole is truly the heart and soul of the Jazz Festival with it all starting here. We have four nights of jam packed jazz entertainment at the hotel from Friday 26th to Monday 29th October.”