Trending
You are at:Home»Aviation»Transatlantic traffic jumps 16pc in record June at Dublin Airport

Dublin Airport handled more than 3.1m passengers in June, which was a new monthly record for the airport and a 7pc increase on the same month last year.
The increase in passenger numbers made it the busiest June in the airport’s 78-year history. The number of passengers travelling to and from continental Europe grew by 6pc (almost 1.7m passengers).
British traffic again grew – although slowly – by 3pc as almost 873,000 passengers took flights. The second-biggest jump was on transatlantic routes – up by 16pc to almost 446,000 passengers. 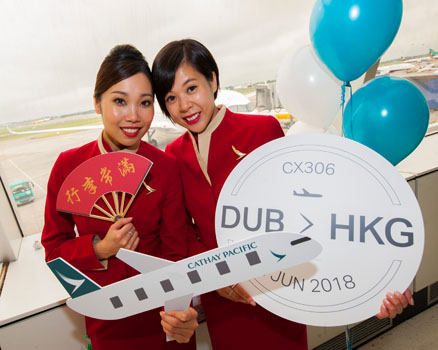 Christine Wang and Winnie Phan at the gate ceremony for the inaugural flight from Dublin to Hong Kong, June 2, 2018