Trending
You are at:Home»Travel Trade News»Emma O’Driscoll pops by to launch this weekend’s Holiday Show in Limerick

Broadcaster and businesswoman Emma O’Driscoll has launched this year’s Holiday Show, the biggest event of its kind outside Dublin.

O’Driscoll is also celebrating the 15th anniversary of the release of the single Whole Lot of Lovin’, with her former pop group Six.

The Holiday Show is being held in association with Shannon Airport this weekend at the UL Arena in Limerck. The event will feature more than 80 worldwide travel suppliers and welcome thousands of visitors. It will open from 12pm to 5.30pm on both Saturday and Sunday. Entry and car-parking is free, with children’s entertainment also on hand. 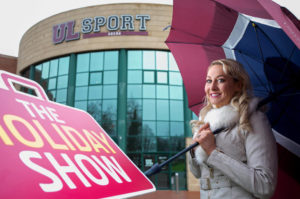 Edmund Hourican, Managing Director Bizex, organisers of the Holiday Show said: “We have a great event lined up and the timing is excellent as it’s going to be a bumper year for holidays, the biggest in over a decade.”

Shannon Airport’s Head of Aviation Development, Declan Power, said: “It’s going to be a big year for holidays and the Holiday Show is going to be bigger as a result this year. Every question people have, from honeymoons to adventure holidays, will be answered at it and there are plenty of prizes also.”