Trending
You are at:Home»Aviation»Cork enters the low-cost transatlantic age as WOW flight touches down

Cork Airport’s entry to the low-cost transatlantic market this year has kicked off, as it welcomed its first flight by Icelandic low-cost airline WOW.

The new year-round service, which comes ahead of Norwegian’s June-onward service from Cork to the US, will offer transatlantic connectivity via Reykjavik to ten destinations across North America: Boston, Chicago, Los Angeles, Montreal, Miami, New York, Pittsburgh, San Francisco, Toronto and Washington DC. 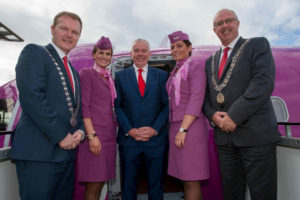 Flights will operate on Monday, Wednesday, Friday and Sunday during the summer season, with three weekly flights during the winter.

Niall MacCarthy, Managing Director at Cork Airport, said: “We are delighted to welcome WOW air to Cork, it is fantastic to see yet another new route take off ahead of the busy summer season. Wow is a dynamic, low cost, modern airline headed and founded by a flamboyant entrepreneur, Skúli Mogensen. The aircraft with their distinctive pink livery will fly four times per week on Monday, Wednesday, Friday and Sunday to Iceland, and then onto ten North American destinations.”

WOW will be in competition with Norwegian on Cork – but will have the advantage of flying direct to Boston, rather than remoter Providence with its Norwegian rival. Niall McCarthy added: “WOW uses main city airports – for example, their Boston flight flies into Boston Logan and their New York flight flies into Newark Airport. Prices are very competitive and if you look on the website today, you can fly to Iceland for €60 one way and New York and Boston for €160 one way, and even to San Francisco for €170 one way.”

Svana Fridriksdóttir said: “Iceland has proved hugely popular with Irish passengers and we’re delighted to be able to expand our services in Ireland. The new service also opens up our transatlantic routes and low-cost fares to Cork passengers, making travel to the US more affordable for Cork-based passengers, via Reykjavik. Equally, Ireland is a very popular destination for the Icelandic and we’re confident that our new route to Cork will be very attractive for weekend getaways to see one of Ireland’s most impressive cities and beautiful coastlines”.

Niall Gibbons, CEO of Tourism Ireland, said: “The new WOW air flight is really good news for tourism to Cork and the South Ireland. As an island destination, the importance of convenient flights cannot be overstated – they are absolutely critical to achieving growth in inbound tourism.”