Trending
You are at:Home»Aviation»Airport and visitor attraction numbers up as Shannon Group turnover hits €67m

Shannon Group, the parent company of Shannon Airport, Shannon Commercial Properties and Shannon Heritage, has announced that turnover hit €67.2m last year, up by over 2pc

New Shannon Group CEO Matthew Thomas said that the group would be looking to spend – particularly on Shannon Airport – to boost the region. “To realise our full potential as a catalyst for growth in the region we plan to undertake a significant investment programme across our businesses, particularly at Shannon Airport and Shannon Commercial Properties,” he said. 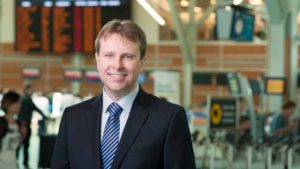 “Our third business unit, Shannon Heritage, manages Ireland’s largest collection of day and night-time visitor attractions and we see very significant opportunity for growth there also, both in terms of increasing visitor numbers at our existing heritage sites and also through expanding our portfolio.”

Shannon Group confirmed that its passenger numbers increased for the fourth consecutive year since  independence in 2013, with over 1.748m passengers flying through the airport, a 2pc increase on 2015, and a 24pc increase since separation in 2013.  Shannon Airport currently operates services to 35 destinations in 11 countries and last year gained new routes including to Edinburgh, winter services to Fuerteventura and Malaga, additional flights to Lanzarote and additional capacity on a range of existing routes.

2016 was a positive year in terms of new business development for the airport, with four airlines – Scandinavian Airlines, Lufthansa, Norwegian Air International and Kuwait Airways – all announcing operations at Shannon. This is the first time in 10 years that four carriers, new to the Shannon schedule, announced services in one year.

In all, over 904,000 people visited the popular visitor attractions, which include Bunratty Castle and Folk Park, King John’s Castle and Malahide Castle and Gardens. Also included in these figures, for the first time, is the Shannon Heritage managed GPO Witness History visitor centre, which opened in Dublin at the end of March 2016 and attracted over 160,000 visitors in its first nine months.

The 2016 Shannon Group plc Annual Report is available to view under ‘Publications’ on the home page of  www.shannongroup.ie