Trending
You are at:Home»Aviation»Amex will follow JFK lounge with LAX and Denver 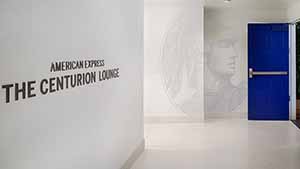 Josh McKay, vice president and general manager of global benefits and services for Amex said lounge access and other benefits have helped drive “rapid acceleration” in signups of new card members over the past 15 months.

The vast majority of these are frequent travellers, he says, and a growing proportion are millennials. The group is also looking to technology to manage lounge access as premium card membership grows.

McKay promised a “very distinctive” look and feel in the 15,000-square-foot Centurion Lounge at JFK, due to open in early 2019. It is being built out of the walls of Terminal 4 and will thrust toward the airport runway. The design and amenities will reflect its setting, including classic New York food and drink offerings.

Amex plans to build further lounges at LAX, and Denver by the end of 2019. They have built airport-based Centurion Lounges in Las Vegas, Houston, Hong Kong, and Dallas Fort Worth, New York LaGuardia, Philadelphia, Miami, Seattle, and San Francisco since 2013, and are planning to expand Dallas, Miami, and Seattle.

The lounges are exclusively for the use of Amex Platinum and Centurion card holders. McKay said new technology rolling out over the next few months will enable card members to book lounge visits with the Amex app and allow the company to manage lounge demand in real time.

He added that the company’s focus on travel goes beyond lounges, aiming to enhance the “traveller experience” from start to finish through such benefits as concierge service and a $200 Uber credit offered to card members.

Josh McKay says: “premium card members tell us lounge access is the number-one benefit of membership,” said McKay during an interview at the popup American Express Centurion Suite during the recent US Open tennis tournament in New York City. They are all very popular, but we want our card members to have access. It’s something we think about all the time.”