Trending
You are at:Home»Aviation»Average Ryanair fare will drop to €28 by 2020, says Michael O’Leary

Michael O’Leary said the average Ryanair fare will reduce to €28 in three years under the airline’s current places to reduce costs.

He said this would come about as a result of a combination of the eight extra seats offered by the new Boeing 737MAX, which has 197 seats as opposed to the 189 on the 737-800, and the fuel savings advantages offered by the new aircraft, of which Ryanair have 100 on order with another 100 options.

He said that by the middle of 2017 Ryanair customers will not be able to make a booking unless they join MyRyanair first.

O’Leary was speaking at an event at the US Ambassador’s residence in Phoenix Park, Dublin, Airline Innovation Flying into the Future with Michael O’Leary, CEO of Ryanair, alongside Sheila Remes, Vice President of Strategy, Boeing Commercial Airplanes. Listen to full presentation here. 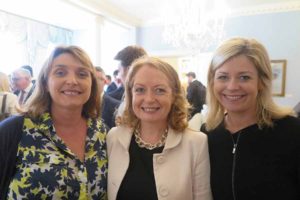 Dee Burdock of American Holidays, Finola Cunningham of the US embassy and Yvonne Muldoon of Aer Lingus at the Creative Minds event

“We are buying at a small premium for the MAX but it comes to us with additional seats which means we can generate about a million dollars a year just from those seats. A million dollars a year over the 20-year life of the aircraft means we are paying for half of the aircraft just with those extra seats. The upside of it is the new airline technology and winglets and scimitars will reduce the fuel consumption probably by 20pc because Boeing are willing to guarantee a 16pc reduction in fuel consumption. We can fly people around in four years a time at air fares that will be 15-20pc cheaper than they are today and we will be saving about 16pc in fuel which means we will be able to pass on about another 15pc fare reduction. This means that our fares will be down around 30pc in the next four years.”

Ryanair average fare has already reduced from €44 to €40 in 2015 as a result of fuel savings. He said further savings would be delivered by MyRyanair:

“We will be carrying 200m passengers a year. But that will be the smaller part of the business in eight years time. The bigger part will be MyRyanair.

MyRyanair is going to be central to everything we are going to do in the next four or five years. We have another 350 aircraft on order so the fleet is going to grow to around 600 aircraft, allowing for a few retirements, in the next eight years. 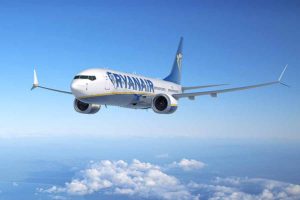 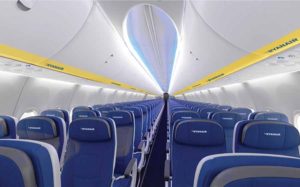 We started Ryanair labs about two years ago because we consciously wanted to do all this in-house. By mid-next year customers will not be able to make a booking unless they join MyRyanair first. What that means is kind of scary, it means we will be with you as a customer of Ryanair every step of the journey. If you want car parking it is all done. If you want coffee on board, click on MyRyanair. no payments on board it will all be done on your MyRyanair account.

“We will tailor the services to whatever you need. We will know the six routes you fly, what hotels you like to stay, if you don’t stay in a hotel, you stay in an apartment, you won’t be shown a hotel at all, but you do use transfer from the airport, you will be shown transfer. Everything you want we can negotiate at a discount for your and deliver it to you. Because we have all your data we will know everything about you, who you are travelling with, where are you going, children, mistress, wife, whatever it is. The days of sending people emails saying do you want 20pc off travel insurance are over. 98pc of people did not want travel insurance so why were we bugging them with this spam? This is going to be a bigger business than Ryanair in the next eight to ten years.”

He said pilot boredom was a problem in the industry. “The technology is now so good pilots are not flying the aircraft anymore. The problem is that pilots are bright people but generally do a very boring task. That is where mistakes get made. It is how you keep them entertained without having them all on playstations?”

On the Norwegian air impasse he said: “Without deregulation you cannot have long haul low cost. We have a stunning example of that at the moment. We technically have open skies between the USA and Europe. Norwegian, utterly shamefully, are being blocked mainly by a lobby activity from the American pilots unions on one side and the Aer LIngus pilots union on this side, using the current elections as a means of forcing the American state department to not allow Norwegian to fly. Europe does nothing except sits on its hands, wringing its hands. The American state department is doing nothing because they might upset someone in Congress. Meanwhile there is no service between Cork and New York. What is actaully missing is the political will to make long haul low cost happen.”