Trending
You are at:Home»Afloat»A beauty is born as WB Yeats is officially named at Irish Ferries ceremony in Germany

The completed hull of the new €150m Irish Ferries cruise ferry WB Yeats has been launched into the water at its shipyard in Germany.
The vessel was officially named by Rikki Rothwell during a ceremony at Flensburger Schiffbau–Gesellschaft in Flensburg. The ship, fully painted in the company’s livery, bears the Yeats name on its bow and stern.

The event was attended by shipyard workers and officials and Irish representatives led by Irish Continental Group Plc Chairman John McGuckian, Chief Executive Eamonn Rothwell, Chief Financial Officer David Ledwidge, and Irish Ferries Managing Director Andrew Sheen.
The 54,985 gross tonnes cruise ferry will arrive into Dublin in July when it will enter year-round service on routes to France and Holyhead.
Before that, remaining construction work on the hull will be completed and the vessel fitted out with technical, operational, décor, furnishings and passenger amenities. It will then undergo sea trials, crew training and docking procedures at the ports into which it will operate. 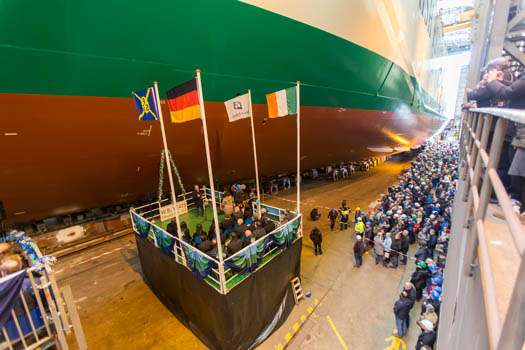 Set to be the largest ferry to sail on the Irish Sea, the vessel will have space for 1,885 passengers and crew, 435 cabins including luxury suites with their own private balconies, and almost 3km of car deck space.
Andrew Sheen said the launch of WB Yeats, with a second new cruise ferry to come “herald in a new era in ferry travel” between Ireland, Britain and Continental Europe, “bringing with it new standards in terms of passenger and freight capacity, comfort and reliability beyond anything previously envisaged”.
The Flensburg shipyard will shortly begin building a second, even larger, ferry for delivery in 2020 which was commissioned weeks ago by Irish Continental Group plc at a contract price of €165.2m.
Intended for service on the Dublin – Holyhead route, this second new vessel will be the largest cruise ferry in the world in terms of vehicle capacity with accommodation for 1,800 passengers and crew. Its vehicle decks will have 5,610 freight lane metres, providing the capability to carry 330 freight units per sailing – a 50pc increase in peak freight capacity compared to the current vessel Ulysses.
The following two tabs change content below.